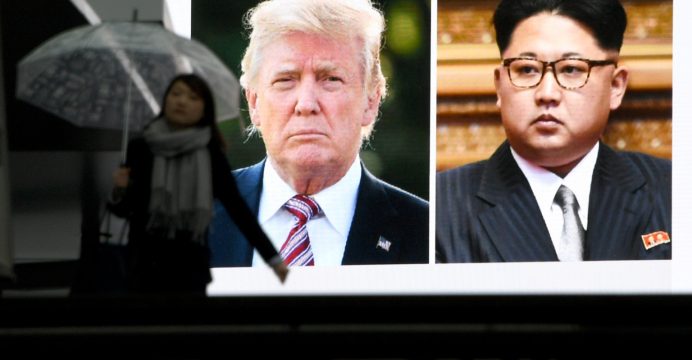 U.S. President Donald Trump said a historic summit with North Korean leader Kim Jong Un on Tuesday had gone “better than anybody could have expected”, and they would sign a document following talks on ways to end a nuclear standoff on the Korean peninsula.

Kim stood silently alongside Trump as he spoke to media during a post-lunch stroll through the gardens of the Singapore hotel where the summit was held, but the North Korean leader had earlier described their meeting as a “a good prelude to peace”.

Both men walked to Trump’s limousine and looked in at the rear seat, with Trump apparently showing Kim something inside. They then resumed their walk.

“A lot of progress – really very positive. I think better than anybody could have expected. Top of the line, very good. We’re going now for a signing,” Trump told journalists, without giving details on what would be signed.

Should they succeed in making a diplomatic breakthrough, it could bring lasting change to the security landscape of Northeast Asia, like the visit of former U.S. President Richard Nixon to China in 1972 led to the transformation of China.

Both men had looked serious as they got out of their limousines for the summit at the Capella hotel on Singapore’s Sentosa, a resort island with luxury hotels, a casino, manmade beaches and a Universal Studios theme park.

But, with cameras of the world’s press trained on them, they displayed an initial atmosphere of bonhomie as they met on the verandah of the Capella, a refurbished 19th century British regimental officers’ mess.

After a handshake, they were soon smiling and holding each other by the arm, before Trump guided Kim to the library where they held a meeting with only their interpreters. Trump had said on Saturday he would know within a minute of meeting Kim whether he would reach a deal.

Inside, they sat alongside each other against a backdrop of North Korean and U.S. flags, with Kim beaming broadly as the U.S. president gave him a thumbs up.

The combatants of the 1950-53 Korean War are technically still at war, as the conflict, in which millions of people died, was concluded only with a truce.

After initial exchanges lasting around 40 minutes, Trump and Kim emerged, walking side-by-side through the colonnaded hotel before entering a meeting room, where they were joined by their most senior officials.

Kim was heard telling Trump through a translator: “I think the entire world is watching this moment. Many people in the world will think of this as a scene from a fantasy…science fiction movie.”

“We overcame all kinds of scepticism and speculations about this summit and I believe that this is good for the peace,” he said. “I believe this is a good prelude for peace.”