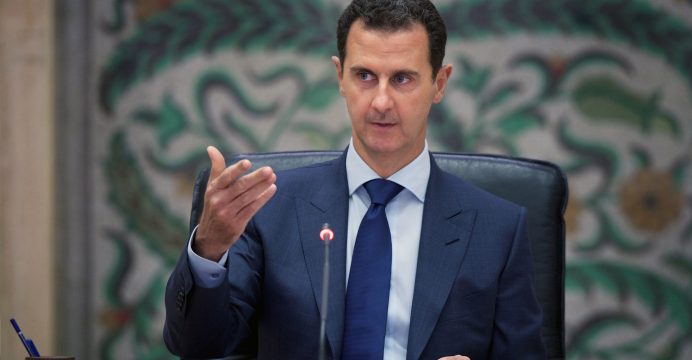 Syrian President Bashar al-Assad denied that military ally Russia was making decisions for him, but said it was natural for there to be differences of opinion between allies, in an interview published on Sunday by state media.

In an interview with British newspaper the Mail on Sunday, carried in full by Syrian state news agency SANA, Assad was responding to a question about whether Moscow now controls Syria’s diplomatic and military moves.

“They (the Russians) never, during our relation, try to dictate, even if there are differences,” he said, according to SANA’s transcript of the interview, given in English.

“It’s natural to have differences between the different parties, whether within our government or other governments; Russia-Syria, Syria-Iran, Iran-Russia, and within these governments, that’s very natural, but at the end the only decision about what’s going on in Syria and what’s going to happen, it’s a Syrian decision,” Assad said.

Iranian and Russian support has been critical to Assad’s war effort, but the different agendas of Assad’s allies in Syria have become more apparent of late as Israel presses Russia to make sure Iran and its allies do not entrench their military sway in the country.

On Tuesday Reuters reported that a Russian troop deployment in Syria near the Lebanese border had caused friction with Iran-backed forces, in what appeared to be a rare case of Russia acting out of sync with Assad’s Iran-backed allies.

Recent Russian calls for all non-Syrian forces to leave southern Syria have been seen as aimed partly at Iran, in addition to U.S. forces based in the Tanf area at the Syrian-Iraqi border.

In the interview, Assad also said he expects the war in his country to be over in “less than a year” and re-stated his aim to take back “every inch” of Syria.

He said the involvement of foreign powers such as Britain, the United States and France was prolonging the conflict and had slowed down a resolution to the situation in rebel-held areas of southwestern Syria.

In recent months Syrian government and allied forces have taken back the last besieged opposition area in Syria, north of Homs, and crushed the last rebel pockets near the capital.

Damascus has now set its sights on the opposition-held parts of southwestern Syria which border Israel and Jordan.

“We were about to achieve reconciliation in the southern part of Syria only two weeks ago, but the West interfered and asked the terrorists not to follow this path in order to prolong the Syrian conflict,” Assad said. The Syrian government refers to all groups opposed to its rule as terrorists.

The United States wants to preserve a “de-escalation” zone agreed last year with Russia and Jordan that has contained fighting in that area. Assad wants to being the area back under state control.