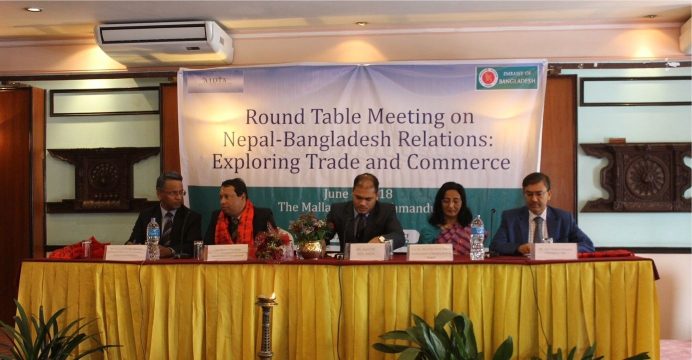 The Asian Institute of Diplomacy and International Affairs (AIDIA) and Embassy of the People’s Republic of Bangladesh, Nepal jointly recently hosted a Round Table Meeting on “Nepal-Bangladesh Relations: Exploring Trade and Commerce” in Kathmandu, Nepal.

The major objectives of the program was to discuss the possible trading arenas between the two countries focusing on connectivity through which trade between the two neighboring countries can flourish and benefit both the parties.

Mr Shubhashish Bose, Secretary, Ministry of Commerce, Bangladesh delivered the key note speech. He spoke about the globalized world and as a part of a global community we need to capitalize our resources so that efficient services can be offered to different countries of the world. He talked about the comparative advantage of Bangladesh having young population against the developed countries which needs to be channelized in the right manner. He also mentioned about the markets and availability of resources in Nepal and Bangladesh to lure FDIs hence additional efforts need to be put in by both the nations to establish a strong foothold in South Asia. The Secretary also shed some light into Bangladesh’s GDP which is estimated to be 7.65% this year and if the 7year plan is properly implemented then 80-82% of the STGs can be achieved.

The Commerce Secretary of Bangladesh shed the light on the tea estates of Nepal as well as the tourism sector where both the countries can cooperate to formulate such policies that could offer a joint package to the tourists who can visit both the countries easily. He also mentioned that Nepal could be the chief exporter of commodities like garlic, lentils, cardamom, etc to Bangladesh.

Lastly, he suggested that the Export Function Bureau of Bangladesh and the same of Nepal could sign a MoU to better facilitate trade and commerce between the two nations. He also said that both the nations need to cooperate to be self-reliant and support the South Asian market rather than wholly depend on their Western or European counterparts.

Mr. Chandra Kumar Ghimire, Secretary, Ministry of Commerce, Nepal emphasized that the population of Nepal has great potential if guided in the right direction and the utilization of the demographic dividend will be in its full form if proper actions taken in the form of education and practice. He mentioned that partnership with our immediate neighbor like Bangladesh is necessary to achieve the estimated GDP of Nepal to be 8% this year. Liberal policies are necessary regarding tariffs and connectivity. He also mentioned the agendas like generation and export of hydropower sector in Nepal, tariff related issues, and preferential market access, Rohan Singbad route, simplification of pharmaceutical products, etc will be put into action. He expressed the need of trilateral cooperation between India-Nepal-Bangladesh to better facilitate trade and commerce.

Mr. Hari Bhakta Sharma, President, Confederation of Nepalese Industries (CNI) said that he is anxious to see the trade agreement happen between both the nations regarding the hydropower sector. He talked about the acute deficiency of infrastructure regarding tourism which needs to be developed to better enhance revenue from tourism industry. He suggested that there can be a common visa for Bangladeshi tourists to India and Nepal. He mentioned that a lot of things need to be done in future but the most important thing to be done is the immediate implementation of the decisions made.