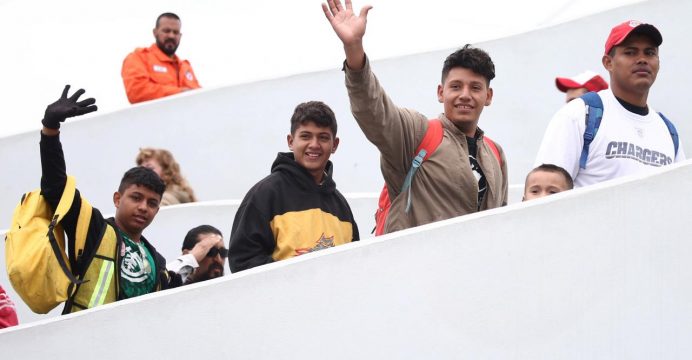 Dozens more Central American caravan migrants were let into the United States to begin pleading their case for asylum on Thursday despite sharp criticism from U.S. President Donald Trump, bringing the total to 158 since last weekend.

Another 62 migrants were still waiting for a chance to begin the asylum process, he said.

On Monday, U.S. Attorney General Jeff Sessions beefed up legal resources on the border, including more prosecutors and judges, to handle the groups of people from the caravan.

Throughout the caravan’s 2,000-mile (3,220-km) odyssey from southern Mexico, its mostly Honduran, Salvadoran and Guatemalan members kept hoping they would ultimately get the chance to make their case for asylum in the United States,

All the while, they have known their pleas might be rejected.

U.S. border officials had allowed through only small groups at a time, saying the busy San Ysidro crossing to San Diego was saturated and the rest must be patient.

The migrants have spent four chilly night camped outside the port of entry.

In response to the caravan’s arrival at the U.S-Mexico border crossing, the U.S. Justice Department said it was sending 35 additional assistant U.S. attorneys and 18 immigration judges to the border.

Trump wants to tighten laws to make it harder for people to claim asylum, citing a more than tenfold rise in asylum claims versus 2011.

He has railed against so-called “catch and release” policies that allow some migrants to remain in the United States while their cases await hearing in a clogged legal system.

The Republican president’s hard-line stance on immigration, both legal and illegal, has animated many of his core supporters even as his support among the broader American public hovers around 40 percent.