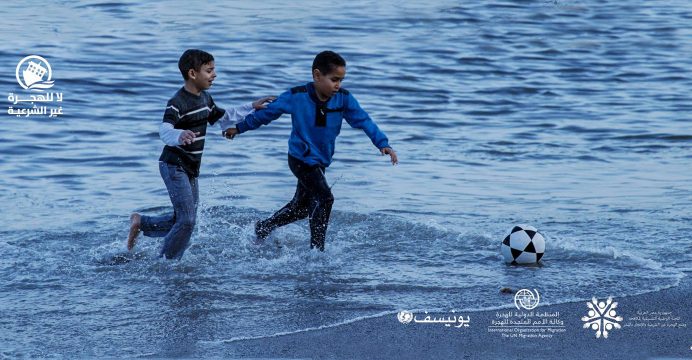 IOM, the UN Migration Agency, and the National Coordinating Committee on Combatting and Preventing Illegal Migration and Trafficking in Persons (NCCPIM&TIP) launched song, “Fares,” and its accompanying video clip on 28 April in cooperation with UNICEF Egypt.

The song and video are part of the second national awareness raising campaign focusing on the dangers of irregular migration, with the endorsement of popular Egyptian artists Zap Tharwat and Ahmed Shiba.

IOM Egypt Chief of Mission Laurent De Boeck, announced the release as follows: “This is an important song aimed at raising awareness among the young population of Egypt of the dangers of irregular migration and human trafficking. It is important to try to make Egyptians see Egypt as a solution instead of contemplating migration as the only opportunity to resolve challenges.”

The campaign is to be followed by a community outreach activation in the six governorates with the highest number of irregular departures across Egypt.

Under the first part of the campaign, IOM Egypt developed a video featuring Egyptian international footballer Hazem Emam, to inform the target population of the dangers involved in attempting sea migration journeys. The video was augmented by a social media campaign which incorporated messages from IOM’s ‘Aware Migrants’ campaign, launched earlier this year by IOM Italy.

To raise awareness on the dangers of irregular migration, the Aware Migrants campaign shows a variety of narratives from trafficking survivors intended to address migrants in transit and potential migrants.

The number of Egyptian youth migrating irregularly to European countries, particularly Italy and Greece, has dramatically increased over the past decade due to multiple push and pull factors. In 2017, Egyptian

Unaccompanied Migrant Children (UMC) ranked second among all nationalities of UMCs present in the Italian territory, with a total of 2,093 cases.