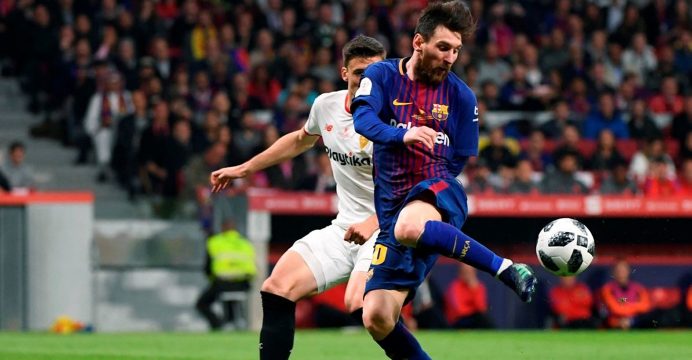 Barcelona need only a point against Deportivo La Coruna on Sunday to confirm a domestic double and win La Liga for the third time in four years.

Andres Iniesta will be at the centre of any celebrations, with the Spaniard expected to announce his Barca departure in the coming days.

The Spaniard made an emotional exit from the victorious Copa del Rey final last weekend, bleary-eyed as he was substituted in the second half, and it will be a nostalgic occasion again when he hoists his final trophy with the club.

“The love and respect that people have for me is something I feel deep inside,” Iniesta said. “My aim now is to try to add the league to the Cup.”

It would be Iniesta’s ninth league title won with Barca, 13 years after his first, and his last might yet prove his finest, given Barca also stand five unbeaten games from becoming La Liga’s only ever invincible team.

Real Madrid could yet intervene when the ‘clasico’ comes to the Camp Nou next weekend but Deportivo would appear unlikely spoilers, sitting 18th, nine points adrift of Levante with four games left to play.

Some have suggested Clarence Seedorf’s side would even prefer to have their fate settled against Barcelona than at the home of their fiercest rivals Celta Vigo, whom they visit six days later.

“We are going to play to death to win it,” Deportivo striker Adrian Lopez said.

“We know that we face a Barca that are practically champions and I hope they come a little calmer than usual. I hope they have their heads on the World Cup.”

That may prove wishful thinking given Barca arrive on the back of arguably their best performance of the season against Sevilla and are still trying to make a statement following their Champions League loss to Roma.

Liverpool’s emphatic 5-2 win over the Italians on Tuesday has only underlined the carelessness of that defeat, while Real beating Bayern Munich to edge closer to a third consecutive European triumph makes their absence all the more galling.

Adding a 25th league crown to the Copa del Rey would go some way to softening the disappointment.

“We have been pursuing the league since the beginning of the season,” Barcelona coach Ernesto Valverde said.

“It’s something that is very hard to achieve, it’s the title that gives you most satisfaction.”

With the title, relegation and Champions League spots all-but settled, La Liga’s climax is likely to be found in the race for the Europa League where at least six teams are fighting it out for three places.

Real Betis look secure, five points clear in fifth, but only six points separate Villarreal in sixth and Celta Vigo in 10th. In between sit Sevilla, Getafe and Girona.

Sevilla will be hoping to bounce back from their hammering by Barca with a win at struggling Levante on Friday while their rivals are guaranteed to drop points, with Villarreal hosting Celta on Saturday and Getafe at home to Girona on Sunday.

“We have to work harder,” Sevilla coach Vincenzo Montella said. “We have to be even more focused now to finish the league well and fight to qualify for Europe.”