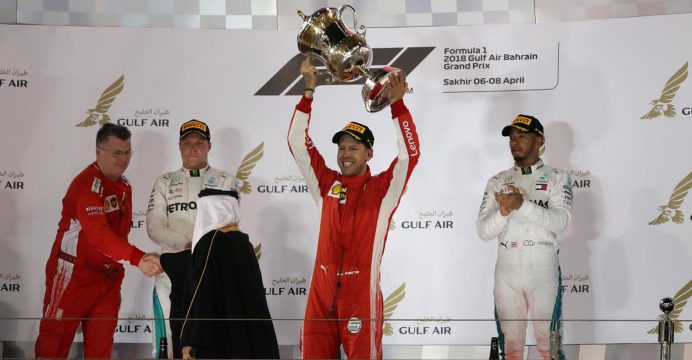 Ferrari’s Sebastian Vettel held on by the skin of his teeth to win a tense Bahrain Formula One Grand Prix in his 200th race start on Sunday.

His tyres fading, the championship leader took the chequered flag only 0.6 seconds clear of Mercedes’ Valtteri Bottas who piled the pressure on in the final 10 laps.

Vettel now leads Hamilton by 17 points after two of the 21 races.

The win under the floodlights was the 49th of Vettel’s grand prix career and an unprecedented fourth at the Sakhir desert circuit.

It also made the 30-year-old, who won in Melbourne two weeks ago, the first Ferrari driver since compatriot Michael Schumacher in 2004 to win the first two races of a season.