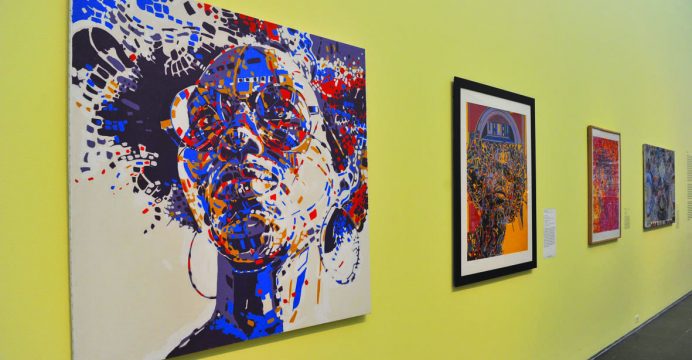 Contemporary artists have drawn upon everything from comic books to Campbell’s soup cans for inspiration in recent years, but New York artist Scooter LaForge has drawn his from an altogether grander source, with a new exhibition based on Homer’s classic poem “The Odyssey.”

The exhibition, hosted in London’s Jealous Gallery and curated by DJ Seth Troxler, features paintings, prints and wall murals that blend imagery from Greek mythology with elements of the gay scene of 1980s New York.

Some of the artworks depict what Troxler describes as “sexy boys and subversive fairies masquerading and transforming into cyclops, nymphs, magical creatures, angels and monsters.”

“It was very sexy to me and then the violence in there was appealing to me, and I thought it was very visual,” LaForge told Reuters.

LaForge’s artworks include depictions of Odysseus and the goddess Circe, who turned the hero’s men into pigs, and Odysseus’ confrontation with the cyclops Polyphemus.

LaForge said he feels that there is room for artistic interpretation in “The Odyssey”, allowing him to incorporate his own unconventional elements into the classic tale.

“It’s a poem by Homer who was blind, written in 800 B.C., so who even knows if this story is what he recited? I’m sure it’s been interpreted a billion times. So this is my version of it.”

The Odyssey is not the only literary classic that LaForge is interested in adapting. Inspired by his time in Britain, he also hopes to tackle Chaucer’s “Canterbury Tales”.

“The Odyssey,” runs at London’s Jealous Gallery until April 10.