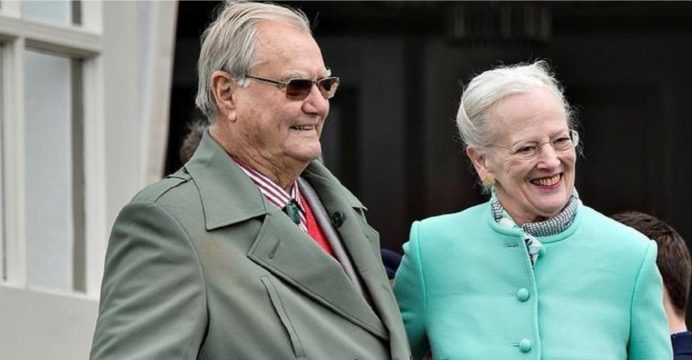 Prince Henrik of Denmark dies at 83

The controversial French-born prince had been diagnosed with dementia last year and was admitted to hospital in January with a lung infection.

Prince Henrik of Denmark, the husband of Queen Margrethe who was famous for his public unhappiness at never being named king, has died at the age of 83.

The controversial French-born prince had been diagnosed with dementia last year and was admitted to hospital in January with a lung infection, reports BBC.

His flamboyant style was both loved and criticised by Danes. Frustrated with his royal title, he announced in 2017 that he did not want to be buried next to his wife.

The 77-year-old queen accepted her husband’s decision, the Royal House said at the time, breaking a 459-year-old tradition of burying royal spouses together.

The prince died “peacefully in his sleep” at the Fredensborg Castle, north of Copenhagen, with Queen Margrethe and their two sons – Crown Prince Frederick and Prince Joachim – at his side.

Born Henri Marie Jean André de Laborde de Monpezat on 11 June 1934, Prince Henrik married the then-crown princess Margrethe in 1967. He met her while stationed in London as a diplomat.

When she became queen in 1972, he was named Prince Consort – as in most monarchies, a princess traditionally becomes queen when her husband takes the throne, but a man does not become king if his wife becomes queen.

But over the years, the prince – who changed his name to Henrik as a mark of respect – made no secret about his unhappiness at being denied the title of king. And many Danes disliked him for that, seeing it as a sign of an arrogant man hungry for recognition.

Prince Henrik did not take it lightly when, in 2002, Crown Prince Frederik was chosen to represent Queen Margrethe at a New Year’s ceremony, instead of him.

Saying he had to “reflect on life”, he dramatically fled to his chateau in southern France, where he would stay for three weeks.

To a Danish tabloid, he said the royal staff had shunted him into “third place in the royal hierarchy”. He had felt “pushed aside, degraded and humiliated”, and his self-respect was being destroyed.

“For many years I have been Denmark’s number two,” he said then.

“I’ve been satisfied with that role, but I don’t want to be relegated to number three.”

While the episode became a source of the joke for many, it was a turning point for others, especially many young Danes, who thought his manner represented a break from the norms of cultural uniformity in Danish society.

Prince Henrik was also known for his thick French accent and his love of food, wine, and poetry, and several of his cookbooks and collections of poems have been published.

In 2016, he retired from official duties, renouncing the title of Prince Consort. In the time since he was often in France at his private vineyard.

Prince Henrik did not want a state funeral, the Royal House said, adding that the ceremony would be small and private.

Following his wish, he will be cremated, with half his ashes spread over Danish seas and the other half buried in the royal private garden at the Fredensborg Castle.

Queen Margrethe already has a specially-built sarcophagus in a cathedral west of Copenhagen where the remains of Danish royals are buried.