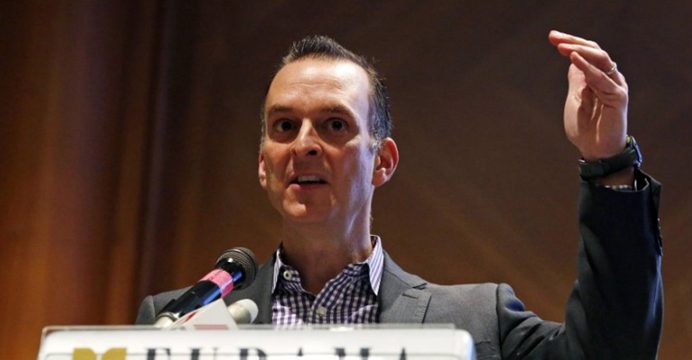 The World Anti-Doping Agency (WADA) said on Sunday the new generation bottles, introduced after the 2014 Sochi Olympics doping scandal, were being looked at after the accredited laboratory in Cologne said it had discovered they might potentially be susceptible to manual opening “upon freezing”.

Travis Tygart, chief executive of the U.S. Anti-Doping Agency (USADA), says there is a simple workaround to a potential integrity issue with new doping sample collection bottles and that no changes are needed for next month’s Winter Olympics.

The International Olympic Committee (IOC) said on Monday it was very concerned about the issue but Tygart told Reuters that USADA did not believe there were any changes that were absolutely necessary.

“I think the simple solution for the Games is that they just don’t freeze any of the samples until the full analysis is completed,” Tygart said in a telephone interview.

“Based on what we understand that will cure this problem.”

The bottles are used to collect and store urine and/or blood samples when an athlete undergoes a doping control test.

“What we have been able to verify is it is a very rare occurrence in the bottle caps, and it happens to some bottles but not all,” Tygart said.

”When those bottles are frozen for a period of time at less than -5 degrees Fahrenheit, the caps can come loose.

“If the bottle has been frozen, and the cap is one of the rare ones that becomes unsealed, that may have created a technicality for a doped athlete to walk,” Tygart said.

“On the one hand it is extremely frustrating,” he said of the bottles’ problems, “but on the other, it is a good thing. When potential holes in the global anti-doping system are exposed so that they can be fixed.”

The manufacturer, Berlinger Special AG, has told WADA it was unable to replicate the issue when the security bottles were handled per the product’s instruction, WADA said.

The Winter Olympics begin on Feb. 5 in Pyeongchang, South Korea.