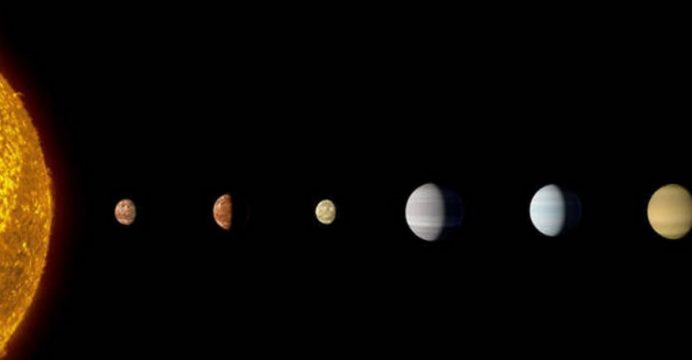 None of the planets are expected to be hospitable to life. The eight-planet system — the largest known outside of ours — orbits a star called Kepler 90 some 2,545 light-years away.

A solar system with as many planets as our own has been discovered with the help of NASA’s Kepler space telescope and artificial intelligence, the US space agency said on Thursday.

“Our solar system now is tied for most number of planets around a single star,” NASA said in a statement.

However, none of the planets are expected to be hospitable to life. The eight-planet system — the largest known outside of ours — orbits a star called Kepler 90 some 2,545 light-years away.

“The Kepler-90 star system is like a mini version of our solar system,” said Andrew Vanderburg, an astronomer at the University of Texas at Austin.

“You have small planets inside and big planets outside, but everything is scrunched in much closer.”

The newly identified planet, Kepler-90i, is a rocky planet like Earth, but orbits its star once every 14.4 days, meaning a full year there is the same as two weeks on Earth.

“Kepler-90i is not a place I’d like to go visit, though,” said Vanderburg.

“Its surface is likely far too hot.”

NASA calculated its average temperature at about 800 degrees Fahrenheit (426 Celsius) — as hot as Mercury, the closest planet to the Sun.

Scientists found it by using machine learning from Google. The process involved teaching a computer to scan a trove of 35,000 possible planetary signals collected from NASA’s Kepler Space Telescope for the search for signs of planetary transits. Transits are the dimming of light when planets pass in front of a star.

The Kepler Space Telescope launched in 2009, and has scanned some 150,000 stars. Astronomers have already confirmed the existence of some 2,500 far-away worlds using Kepler data.

“I became interested in applying neural networks to astronomy when I learned that the Kepler mission had collected so much data that it was impossible for scientists to examine it all manually,” said Christopher Shallue, a senior software engineer with Google’s research team.

“Instead scientists selected the strongest signals, which are the most likely to be actual planets, to receive the most attention.”

Shallue likened this process to “looking for a needle in a haystack.”

“Machine learning really shines when there is too much data for humans to examine for themselves.”

More planets are expected to be found, because researchers plan to apply their neural network to Kepler’s full set of more than 150,000 stars.

“There is a lot of unexplored real estate in the Kepler 90 system,” said Vanderburg.

“It would almost be surprising to me if there weren’t any more planets in around that star.”

One day, artificial intelligence might even be used to search specifically for more Earth-like planets, which have proven difficult to pin down.