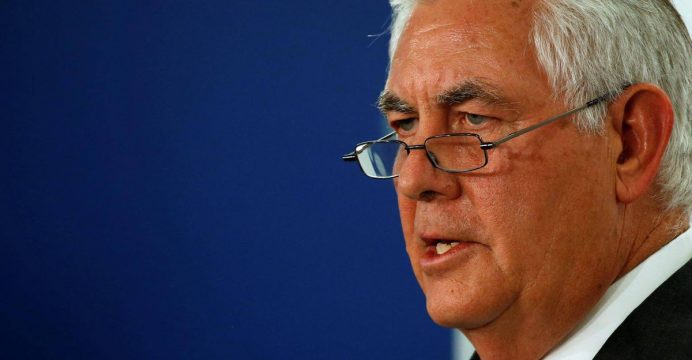 Tillerson says, US ready for North Korea talks without preconditions

The US is “ready to talk any time” with North Korea without preconditions, says Secretary of State Rex Tillerson.

His statement appeared to shift the US position away from previous demands that North Korea must disarm before any talks can be held.

North Korea’s pursuit of nuclear weapons technology has led to heavy US-led sanctions against the regime.

Diplomatic relations between the US and North Korea have been strained by recent North Korean nuclear and missile tests, and by a war of words between US President Donald Trump and North Korea’s leader Kim Jong-un.

Appearing to soften the US stance towards potential future talks, he said: “Let’s just meet and let’s talk about the weather if you want and talk about whether it’s going to be a square table or a round table if that’s what you’re excited about.

“Then we can begin to lay out a map, a road map, of what we might be willing to work towards.”

But he insisted that there needed to be a “period of quiet” first, without any nuclear or missile tests.

He added that economic and diplomatic sanctions would continue until “the first bomb drops”, and Mr Trump still wanted China – Pyongyang’s main economic ally – to cut off oil supplies to North Korea.

Mr Tillerson also said China had made contingency plans to accommodate North Korean refugees in the event of a conflict, a major concern for China.