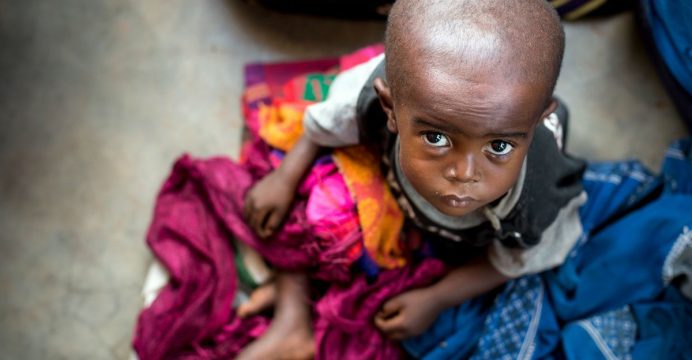 The dire situation has largely been caused by violence, mass displacement, and reduced agricultural production over the past 18 months.

At least 400,000 children under five in the Kasai region of the Democratic Republic of the Congo are suffering from severe acute malnutrition and could die in 2018 if they are not urgently reached with lifesaving health and nutrition interventions, UNICEF warned today.

The dire situation has largely been caused by violence, mass displacement, and reduced agricultural production over the past 18 months.

While the security situation has stabilized in parts of the region and some displaced populations have begun to return to their homes and communities, humanitarian conditions remain critical. More than 750,000 children across the region are acutely malnourished, while 25 health zones in the Kasai region are now in a situation of nutritional crisis with emergency thresholds on nutrition exceeded.

This nutrition crisis and food insecurity in the Kasai region follows the displacement of thousands of families who have been living for months in very harsh conditions,” said Dr. Tajudeen Oyewale, UNICEF Acting Representative in the Democratic Republic of the Congo.

“The true scale of the problem is becoming clear as people are returning home in some areas where the security situation has improved and health services have started functioning again.”

The violence and displacement of 1.4 million people in the Kasai region have led to food shortages, with two-thirds of households unable to work their land to grow crops. Severe food insecurity is now affecting large parts the region, and conditions are not expected to improve before June 2018, because the planting seasons in 2017 were lost. Families have little to harvest their own land and nothing to sell at the markets.

Health facilities have also been devastated, making it more difficult to provide treatment and care for severely malnourished children. Approximately 220 health centers were destroyed, looted or damaged, leading to a weakening of the health delivery system, reduced access to healthcare and an increased risk of the spread of communicable diseases like measles.

Since January 2017, UNICEF and its partners have provided therapeutic nutritional care to 50,700 children with severe acute malnutrition, aged between 6 and 59 months, in the Kasai region. However, the children’s agency has received just 15 per cent of the funding required to respond to the nutritional needs of children in 2017.