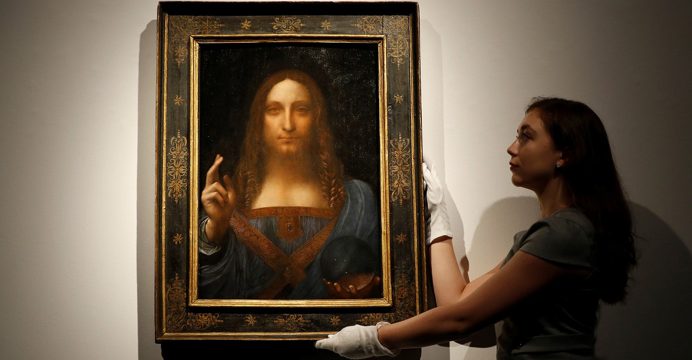 “Salvator Mundi,” which the auction house dates back to around 1500, sold after 18 minutes of frenzied bidding in a historic sale, the star lot of the November art season in the US financial capital.

Lost for years only to resurface at a regional auction in 2005, it is one of fewer than 20 Da Vinci paintings generally accepted as being from the Renaissance master’s own hand, according to Christie’s.

All the others are held in museum or institutional collections.

Wednesday’s price was all the more extraordinary given that the oil on panel fetched only 45 British pounds in 1958, at the time believed to have been a copy, before subsequently disappearing for years.

Dated to around 1500, the work sold after 19 minutes of frenzied bidding — an incongruous Old Master in Christie’s evening postwar and contemporary sale, which attracts the biggest spenders in the high-octane world of international billionaire art collectors.