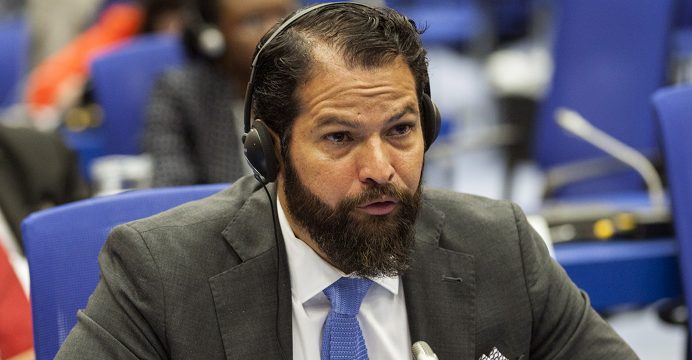 Before his latest appointment, Mr. Escalante served with the Special Mission in support of the El Salvador Presidency of the Community of Latin American and Caribbean States (CELAC) in Brussels between January and October 2017.

From August 2015 to January 2017, Mr. Escalante was in charge of the disarmament, humanitarian, environmental and disaster risk reduction portfolios at his country’s Permanent Mission to the United Nations and other International Organizations in Geneva.

Mr. Escalante served as El Salvador’s Deputy Permanent Representative to the United Nations in New York from May 2013 to July 2015, and as Minster Counsellor from December 2011 to May 2013.

Between November 2008 and November 2011, Mr. Escalante was the International Coordinator for the Tokyo-based non-governmental organization “Peace Boat”, which is devoted to preventing conflict, promoting human rights, environmental issues and nuclear disarmament. He held several positions in the Ministry of Foreign Affairs from January 2008, having joined the Foreign Policy Bureau as a Desk Officer in June 2002.