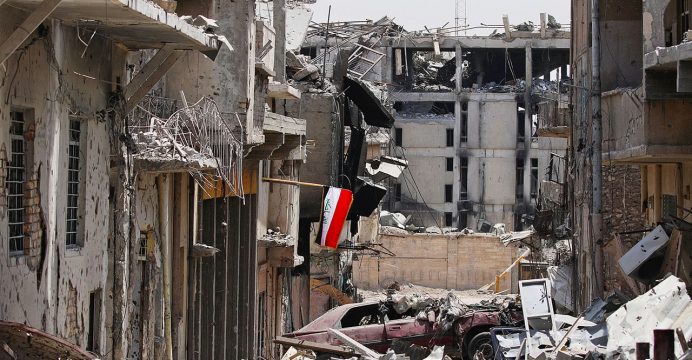 Iraqi Prime Minister Haider al-Abadi ordered a 24-hour suspension to military operations against Kurdish forces in northern Iraq, to allow for the peaceful deployment of Iraqi troops at the border crossings with the Kurdistan region.

A Kurdish spokesman earlier said the two sides reached an agreement on Friday to stop fighting which broke out on Oct. 16, after Iraqi forces seized the oil-city of Kirkuk.

Abadi ordered the offensive on Kirkuk and other Kurdish-held territory in retaliation to the Sept. 25 vote for independence in a referendum organized by the Kurdistan Regional Government (KRG) – a drive that was all but crushed by the surprise attack.

The 24-hour truce “should allow a joint technical committee … to work on the deployment of federal Iraqi forces in all disputed areas, including Fish-Khabur, and the international border”, Abadi said in a statement.

“This should prevent bloodshed between the children of the same country.”

He wants to take control of border crossings with neighboring countries, including one in the Fish-Khabur area through which an oil export pipeline crosses into Turkey, carrying Iraqi and Kurdish crude oil.

The KRG on Wednesday proposed an immediate ceasefire, a suspension of the referendum result and “starting an open dialogue with the federal government based on the Iraqi constitution” – call rejected by Baghdad.

According to the KRG, which is based in the Kurdish autonomous region’s capital of Erbil, the ceasefire entered effect at 1 a.m. on Friday (2200 GMT Thursday).

U.S. Secretary of State Rex Tillerson has also urged dialogue to start, in a call to Abadi, the Iraqi central government said in a statement on Friday morning.

U.S.-backed Iraqi government forces, Iranian-backed paramilitaries and Kurdish fighters fought alongside each other to defeat Islamic State, also called ISIS, but the alliance has faltered with the militants largely defeated in the country.

The multi-ethnic city of Kirkuk, which lies outside the KRG official boundaries, fell to Iraqi forces without much resistance on Oct. 16 but the Kurdish Peshmerga began to fight back as they withdrew closer to the core of the Kurdish region.

The fall of Kirkuk, considered by many Kurds as the heart of their fatherland, was a major symbolic and financial blow to the Kurdish drive for independence championed by Barzani, as it halved the region’s oil export revenue.

The most violent clashes happened in the northwestern corner as the Peshmerga fought back offensives toward Fish-Khabur, and also south of their capital Erbil, leaving dozens of casualties on both sides.

Speaking in Geneva on Thursday, Tillerson said he was “disappointed that the parties have been unable to reach an entirely peaceful resolution” and that he had encouraged Abadi to accept the KRG “overtures for talks on the basis of the Iraqi constitution”.

Abadi demanded on Thursday that the Kurds declare their referendum void, rejecting the KRG offer to suspend its independence push to resolve a crisis through talks. “We won’t accept anything but its cancellation and the respect of the constitution,” he said in a statement during a visit to Tehran.

The spokesman of the U.S.-led anti Islamic State coalition in Baghdad, U.S. Colonel Ryan Dillon, told Reuters: “Both parties are talking with one another, but it is not an official ceasefire.”

In an interview with Kurdish TV Rudaw, Dillon called on the two sides to extend the deal to a complete halt in hostility and “refocus our efforts on defeating ISIS”. “We are encouraging dialogue, we are trying to get the tensions down,” he added.

Iraqi forces on Thursday launched an offensive to recapture the last patch of Iraqi territory still in the hands of Islamic State, on the border area with Syria.

Abadi has expressed hope the group will be completely defeated in Iraq before the end of the year.

The militant group also holds parts of the Syrian side of the border, but the area under their control is shrinking as they retreat in the face of two sets of hostile forces – a U.S.-backed, Kurdish-led coalition and Syrian government troops with foreign Shi‘ite militias backed by Iran and Russia.

Islamic State leader Abu Bakr al-Baghdadi, who declared the caliphate from Mosul in mid-2014, released an audio recording on Sept. 28 that indicated he was alive, after several reports he had been killed. He urged his followers to keep up the fight despite setbacks.