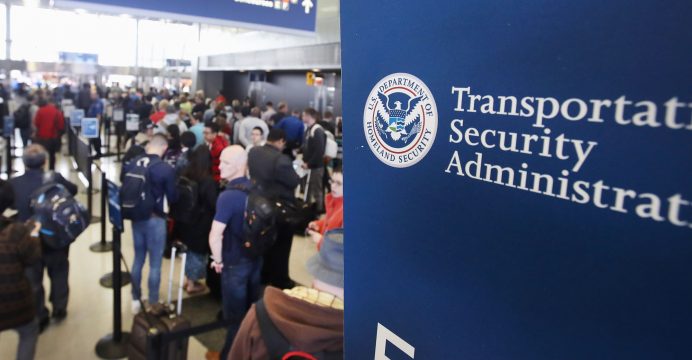 Airlines get ready for new US security rules from Thursday

New security measures including stricter passenger screening take effect on Thursday on all US-bound flights to comply with government requirements aimed at responding to threats of hidden explosives, airlines said.

Airlines contacted by Reuters said the new measures could include short security interviews with passengers at check-in or the boarding gate, sparking concerns over flight delays and extended processing time.

They will affect 325,000 airline passengers on about 2,100 commercial flights arriving daily in the United States, on 180 airlines from 280 airports in 105 countries.

US Transportation Security Administration officials are giving some airlines or airports additional time to comply with the new interviews as long the US government has approved security plans by Thursday.

“TSA will continue to work closely with our aviation partners and verify that all security enhancements are accurately implemented,” TSA spokeswoman Lucy Martinez said in a statement Wednesday.

The United States announced the new rules in June to end its restrictions on carry-on electronic devices on planes coming from 10 airports in eight countries in the Middle East and North Africa in response to concerns that explosives could be hidden in electronic devices.

Those restrictions were lifted in July, but the Trump administration said it could reimpose measures on a case by case basis if airlines and airports did not boost security.

European and US officials said at the time that airlines had 120 days to comply with the measures, including increased passenger screening. The 120-day deadline is Thursday. Airlines had until late July to expand explosive trace detection testing.

“We see this as a big issue for China Airlines,” Steve Chang, senior vice president of the Taiwanese firm told reporters on Wednesday, adding the airline was trying to consult with the American Institute in the country over the issue.

Korean Airlines, South Korea’s flagship carrier, also said it had a lot of concerns with the new measures.

“We are asking customers to show up at the airport early … It’s just inconvenient for the passengers,” President and Chief Operating Officer Walter Cho told Reuters in Taipei.

Lufthansa Group said on Tuesday the measures would be in place by Thursday and travelers could face short interviews at check-in or at the gate.

Economy passengers on Lufthansa’s Swiss airline have been asked to check in at least 90 minutes before departure.

Cathay Pacific Airways Ltd said it would suspend in-town check-in and self bag-drop services for passengers booked on direct flights to the United States. The airline said passengers would also have short security interviews and it has advised travelers to arrive three hours before departure.

Singapore Airlines Ltd said the security checks could include inspections of personal electronic devices as well as security questioning during check-in and boarding.

Airlines for America, a US trade group, said the changes “are complex security measures” but praised US officials for giving airlines flexibility in meeting the new rules.

Alexandre de Juniac, CEO of the International Air Transport Association, said the industry understood security threats to aviation were made regularly but in this case the US government had not shared any specific dangers before changing the rules.

“What we have seen is very strange,” he told reporters in Taipei. “Unilateral measures announced without any prior consultation… That is something that is very concerning and disturbing.”

At their annual meeting in Taipei, Association of Asia Pacific Airlines (AAPA) members passed a resolution calling for security measures to be risk-based, outcome-focused and proportionate to the probable threat.

US authorities in June also ordered increased security around aircraft and in passenger areas, and other places where travelers can be cleared by US officials before they depart and ordered enhanced screening of personal electronic devices. Some of those new requirements take effect this week as well.

The TSA said in July it was imposing new security rules requiring US domestic airline travellers to remove all electronic items larger than mobile phones such as tablets, e-readers and video game consoles from carry-on baggage for screening.