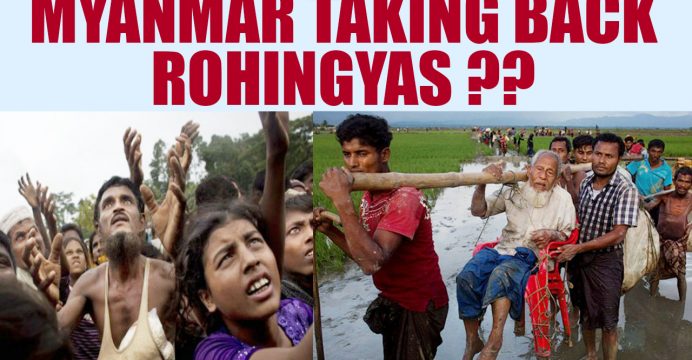 Myanmar agrees to take back Rohingyas

Myanmar on Tuesday agreed to take back the Rohingya people, forced out of their homes in its Rakhine state and pushed into Bangladesh, state-run BSS news agency reports.

It says Myanmar would also implement the Kofi Annan commission’s report as part of the process.

Both Myanmar and Bangladesh would form a joint working group in this regard by 30 November.

A decision to this effect was taken at a bilateral, home ministry-level meeting on security and law enforcement matters held at Naypyidaw, the capital of Myanmar. Home minister Asaduzzaman Khan, now in Myanmar on an official visit leading a 12-member Bangladesh delegation, is scheduled to make a courtesy call on Myanmar’s state counsellor Aung San Suu Kyi on Wednesday at 10.00 am (local time), according to a message received in Dhaka on Tuesday from the Myanmar capital.

Suu Kyi, de facto leader of Myanmar, was widely criticised for her silence about atrocities committed by Myanmar forces that forced more than 600,000 Rohingyas to take shelter in Bangladesh.

The title of Tuesday’s meeting held between the two countries was “Cooperation with Myanmar and Bangladesh: Ministerial Meeting on Security and Law Enforcement Matters,” where bilateral cooperation relating to security and law enforcement issues, came up for discussion.

During the meeting, both the sides signed two memorandums of understanding (MoUs), the message sent by the home ministry’s public relations officer Sharif Mahmood Apu said.

Senior officials of Bangladesh and Myanmar held another meeting there. Secretary of public security division of home ministry Mostafa Kamal Uddin led the Bangladesh side, while Myanmar’s secretary Yuen Tin mayent led his country’s 16-member delegation at the meeting.

Home minister Asaduzzaman Khan left Dhaka on Monday for Myanmar on a three-day official visit to resolve different issues, including Rohingya crisis, with the Myanmar government.