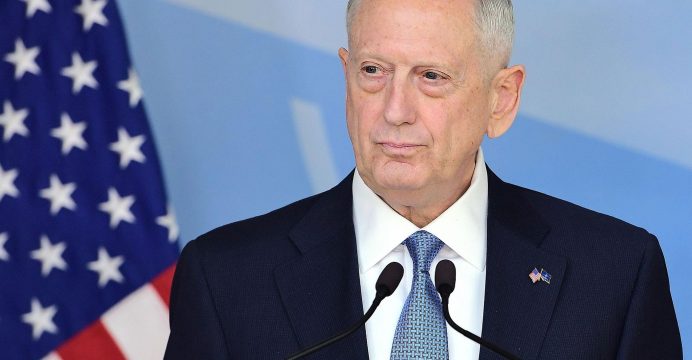 U.S. Defense Secretary Jim Mattis visited Kabul on Wednesday to pledge support for the government of President Ashraf Ghani, with the precarious security in the Afghan capital underlined by a rocket attack on the airport hours after he touched down.

Arriving from India, where he sought support for the U.S. administration’s new South Asia security plan, Mattis said the United States was determined not to allow “a merciless enemy to kill its way to power”.

Promising a more “holistic” approach without fixed timetables and involving other countries in the region, including Pakistan, he said the Taliban would have to learn they could not defeat the government.

“I want to reinforce to the Taliban that the only path to peace and political legitimacy for them is through a negotiated settlement,” Mattis told a joint news conference with Ghani and NATO Secretary General Jens Stoltenberg.

The visit comes after U.S. President Donald Trump announced a new strategy for Afghanistan, promising a stepped-up military campaign against Taliban insurgents who have gained ground as they seek to reestablish Islamic law after their 2001 ouster.

But a rocket attack on Kabul airport that injured five civilians and was claimed by both Islamic State and Taliban insurgents highlighted the rebels’ ability to strike the Western-backed government.

Fighters holed up in a nearby building continued to resist security forces for hours, a spokesman for the interior minister said.