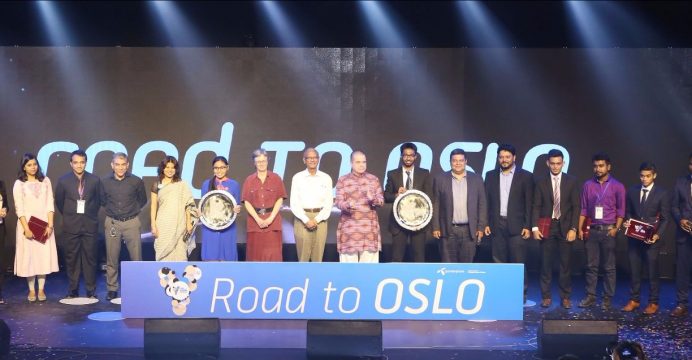 The Bangladesh round of Telenor Youth Forum (TYF) selects Myat Moe Khaing and Rakib Rahman Shawon students of IBA and Dhaka University respectively at the TYF Grand Finale held at GP House. The winners will join the TYF global event in Oslo, Norway in December.

The Telenor Youth Forum, in partnership with the Nobel Peace Center, offers an opportunity for young people, aged from 18 to 28, from 13 countries where Telenor has operations, to step up and present impactful ideas that can alter lives. The theme for the event is ‘Digitalization for Peace’. The Bangladesh selection round was organized by Grameenphone. The Grand Finale was held on September 24, 2017. This year over 1400 candidates applied to participate in the program.

Each year two individuals are selected to represent Bangladesh at the TYF global event. This year’s winning ideas are ‘Mukti’ and ‘Make Them Strong’.

The top participants, who were selected through a stringent selection process, presented their final ideas to a jury of experts from Grameenphone and outside. The two winners were selected from 7 individuals who presented their best ideas to a judge’s panel. The winners will attend the TYF conference in Oslo, scheduled from December 8 to 11, 2017, during the Nobel Peace Prize ceremony. The TYF Grand Finale event was attended by university faculty members, local entrepreneurs from established startups, journalists, government officials, digital and social media experts, and students from different universities.

Mr. Nurul Islam Nahid, MP Hon’ble Minister, Ministry of Education, Government of the Peoples Republic of Bangladesh was the Chief Guest. As a special guest Her Excellency Sidsel Bleken, Ambassador, Royal Norwegian Embassy in Dhaka was also present in the Grand Finale. Michael Foley, CEO of Grameenphone, was also present on the occasion along with other officials of the company.

Speaking on the occasion, the Minister of Education said that education is very important for Bangladesh’s development and I’m thanking Grameenphone for giving our students a global platform to learn.

Expressing her excitement with the TYF presenters, the Norwegian Ambassador, said, ‘Your ideas and innovations are important to the world. I urge you to use TYF and the digitalization for peace platform to turn them into reality.’

The candidates chosen from Bangladesh, along with all the winners from other Telenor business units will attend a three-day conference in Oslo, Norway. These brilliant young minds will meet and collaborate, to explore the transformative power of mobile and digital communications towards the implementation of socially beneficial services and projects. They will also have the opportunity to attend the Noble Peace Prize ceremony.

Grameenphone launched TYF 2017 in May through a press conference. The company invited students and interested applicants to submit their ideas through various online submission channels like Telenor webpage, Grameenphone webpage, official Facebook page etc. This event was first launched in 2014 and has grown to become an important event for innovation and social entrepreneurship.

It is hoped that the TYF theme “Digitalization for Peace” and the youth-centric focus of the platform actively compliments Grameenphone and Telenor Group’s vision of “Empowering Societies.”