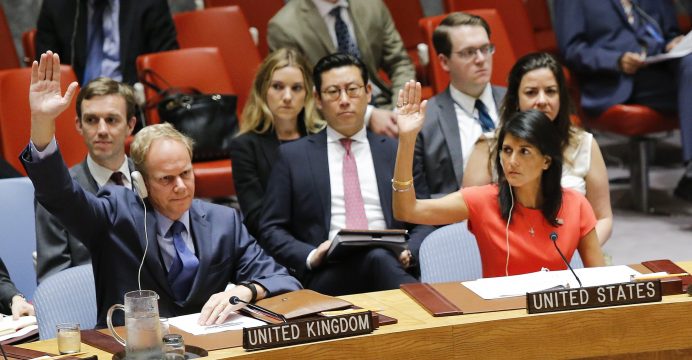 The United States on Friday told the U.N. Security Council that it intends to call a meeting on Monday to vote on a draft resolution establishing additional sanctions on North Korea for its missile and nuclear program, the U.S. Mission to the United Nations said in a statement.

The United States wants the Security Council to impose an oil embargo on North Korea, ban its exports of textiles and the hiring of North Korean laborers abroad, and to subject leader Kim Jong Un to an asset freeze and travel ban, according to a draft resolution seen by Reuters on Wednesday.

It was not immediately clear how North Korean ally China and Russia would vote, but a senior U.S. official on Friday night expressed skepticism that either nation would accept anything more stringent than a ban on imports of North Korean textiles.

Chinese officials have privately expressed fears that imposing an oil embargo could risk triggering massive instability in its neighbor.

A Security Council resolution needs nine votes in favor and no vetoes by permanent members Britain, the United States, France, Russia or China to pass.

Tension on the Korean peninsula has escalated as the North has stepped up the development of weapons, testing a string of missiles this year, including one flying over Japan, and conducting its sixth nuclear test on Sunday.

South Korea braced for a possible further missile test by North Korea when it marks its founding anniversary on Saturday.

Experts believe the isolated regime is close to its goal of developing a powerful nuclear weapon capable of reaching the United States, something President Donald Trump has vowed to prevent.