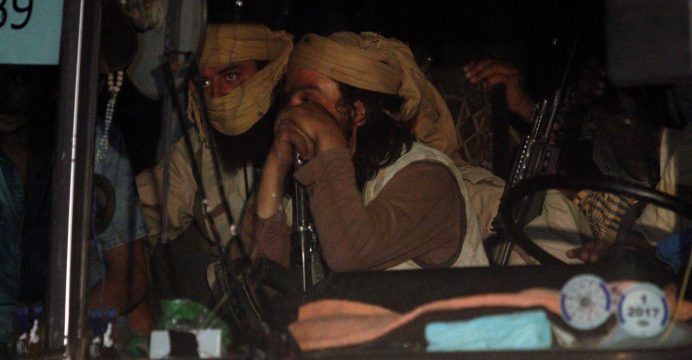 An Islamic State evacuation convoy in eastern Syria that was blocked by U.S.-led air strikes will head from government-held Sukhna towards the IS-held Deir al-Zor region, a commander in the pro-Syrian government military alliance said on Thursday.

Hezbollah and the Syrian army arranged the evacuation as part of a ceasefire with Islamic State in an enclave on the Lebanon-Syria border after an offensive last week.

But U.S.-led coalition forces blocked the convoy from moving into Islamic State-held territory on Wednesday by striking the road ahead and some of their comrades traveling to meet them.

The ceasefire deal has been criticized by the coalition and by Iraq, whose army is also fighting Islamic State in areas next to the eastern Syria region to which the convoy was headed.

The coalition might strike again, the coalition spokesman Colonel Ryan Dillon said by phone on Thursday.

“We will continue to monitor the convoys in real time … and take advantage of known ISIS (fighters) in open areas away from civilians and strike them,” he said.

Dillon said on Wednesday the coalition was “not bound by these agreements,” referring to the ceasefire deal and making clear it was being used to move fighters from one location to another “to fight yet again”.

The commander in the pro-Syrian government military alliance said the location for the convoy to move into IS-held territory had been changed from Humeima in the southeast to Sukhna, further north, and that part of the deal was already moving forward.

He said an exchange had begun in the desert, under which the bodies of an Iranian killed in the fighting and two other dead fighters would be swapped for 25 wounded IS fighters.

Iran backs Syrian government forces in the civil war that began in Syria in 2011. In Tehran, the country’s Revolutionary Guards said on its website that the dead Iranian had been identified as Mohsen Hojaji and that a funeral procession would be held for him in the Iranian capital on Saturday.