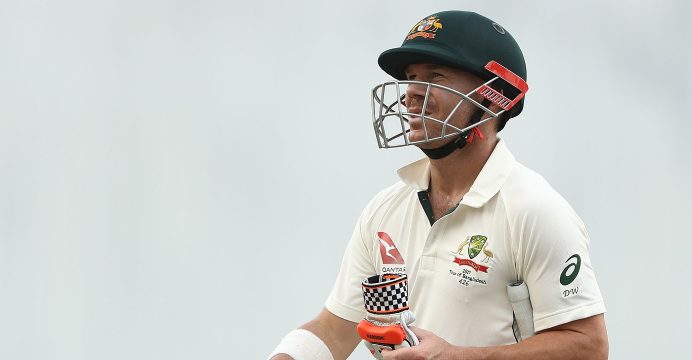 Australia smell victory as they finish strongly the third day

Australian batsmen David Warner and Steven Smith took advantage of poor fielding by Bangladesh fielders as they smell victory as the later finished the day three on a very strong position at 109 for 2 in the first Test of Rocket two-match series match at Sher-e-Bangla National Cricket stadium on Tuesday.

Both of them never looked back with Warner playing an aggressive innings of 75 and while Steven Smith made sure to keep the other end intact with a responsible 25 as the stumps were drawn for the day.

However Aussie began their second innings and soon ran into trouble as promising off-spinner Mehedi Hasan Miraz dismissed Matt Renshaw and Shakib Al Hasan got rid of Usman Khawaja and suddenly Australia were staggering at 28 for 2.

Both batsmen surviving a torrid half hour went to restore the early damages and finish the evening leaving themselves a great chance to go one up in the series.

It should be a very important on fourth day for both the teams as Bangladesh needs another eight wickets for a historic win while visitors have easier task in hand as they need only 156 runs to win the match.

Mehedi brought early success for Bangladesh in the eighth over of the afternoon’s play as he trapped Renshaw leg before wicket. The ball beats the inside edge and thuds into the pad beneath the roll. Usman Khawaja’s poor form continued on as he tried to sweep Shakib and gets a top edge to fine leg, where Taijul took a good catch.

Earlier, Bangladesh set Australia a target of 265 to win the first Test after the hosts were bowled out for 221 in their second innings.

Off-spinner Nathan Lyon took 6-82 as Bangladesh lost nine wickets in little over two sessions on the third day after they resumed their second innings on 45-1 on the third day.

Tamim Iqbal maintained his prolific form as he hit his second half century followed by his skipper Mushfiqur Rahim’s useful 41 runs.

He played a magnificent knock of 78 off 155 balls that was studded eight boundaries and shared a useful 66 run partnership for the fourth wicket to take Bangladesh to a total of 221.

The Tigers in the afternoon were well placed and it looked they were heading on to the direction seeking their first-ever win over Australia in what is only their fifth Test meeting. Australia are fourth in the ICC Test rankings.

Bangladesh scored 72 runs in the morning session for the loss of two wickets with dangerous off-spinner Nathan Lyon taking both the wickets to fall in the morning, trapping night watchman Taijul Islam lbw for four and forcing Imrul Kayes to edge a catch to David Warner at second slip for two.

Tamim and Mushfiqur Rahim added valuable 68 runs for the fourth wicket partnership. Left-handed opener Tamim looked well settled heading for his deserving century but after the lunch Aussie bowlers came back strongly to break this crucial partnership as Pat Cummins forced him to edge as Wade took the fine catch to dismiss Tamim for 78 laced with glorious boundaries.

Australia fought as grimly as they captured four more wickets to reduced the host to 188 for 8. Shakib played a poor shot to be out for 5, Mushfiq Rahim was unluckily run out for a polished 41, Nasir fell for a duck and Sabbir looking to have found the groove, fell for 22.

Mehedi Hasan Miraz put a brave 26 as Bangladesh managed to crawl past 200 marks to be bowled out for 221 taking an overall lead to 265.

At one stage they looked like heading well past 300 mark but some brilliant bowling led by Lyon’s six wicket’s haul and Ashton Agar’s two saw Bangladesh surrendered their comfort zone back to their rivals as the third day’s play ended .