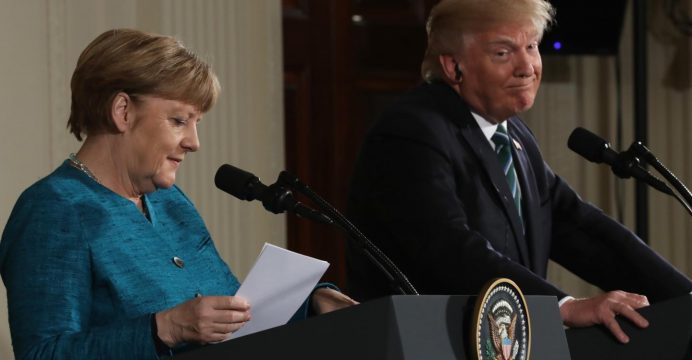 Alarmed by the rise of unpredictable strongmen around the world, Angela Merkel feels she must do more to defend the Western order on which Germany depends.

It has been a transformation for the chancellor. Last year, she dismissed as “absurd” the idea that she should head a Western alliance shaken by Donald Trump’s U.S. election victory.

Weakened by Europe’s migrant crisis, Merkel even wondered if she should run for re-election. “She asked herself: ‘Can I do this? Am I ready for this?'” one close aide said.

But now, with the migrant issue under control in Germany, the 63-year-old is ready. Visibly happier, she is campaigning for next month’s election with renewed conviction: a resolve to secure a world order threatened by leaders like Trump, Vladimir Putin and North Korea’s Kim Jong Un, reports Reuters.

On the campaign trail, she likes to invoke the “uncertain situation in the world”.

The message is clear. “Things have changed,” the aide said. “This means Germany must take on more responsibility.”

German foreign policy has been constrained by the legacy of the last World War. But Merkel is pushing Berlin’s interests beyond its traditional European sphere.

With North Korea, she says Germany is ready to offer diplomatic and political muscle if required, a senior government source said. Germany is one of the few Western countries with an embassy in Pyongyang and is willing to do what it can to use this channel to help bring about talks.

At the same time, Merkel is using the trade-based relationship she has nurtured with China to press Beijing to help defuse the dispute.

“We must use our good relations with the Chinese to encourage them to come up with constructive proposals on what can be done,” said Juergen Hardt, the German government’s coordinator for transatlantic policies.