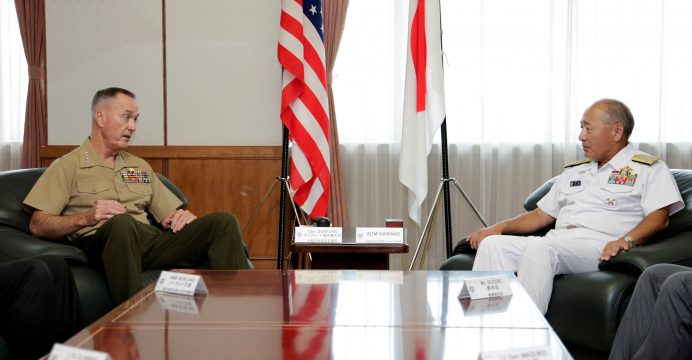 The top U.S. general restated Washington’s “ironclad commitment” to the security of its close Asian ally, Japan, on Friday amid regional tensions over North Korea, telling his counterpart in Tokyo that “an attack on one is an attack on both of us”.

Fears about North Korea’s missile and nuclear weapons programs have grown in recent weeks. Pyongyang has said it was considering plans to fire missiles over Japan toward the U.S. Pacific territory of Guam, although North Korean leader Kim Jong Un appears to have delayed the decision, reports Reuters.

U.S. Defense Secretary Jim Mattis, Secretary of State Rex Tillerson and their Japanese counterparts agreed at a meeting in Washington on Thursday to work more closely on North Korea.

“The most important thing (the ministers’ meeting) did was reaffirm the primacy of our bilateral relationship here in Asia-Pacific,” U.S. Joint Chiefs of Staff Chairman Joseph Dunford said at the start of a meeting with the Chief of Staff of Japan’s Self-Defence Forces, Admiral Katsutoshi Kawano.

Tillerson said in Washington the United States wanted dialogue with Pyongyang, but only if it were meaningful.

“Our effort is to cause them to want to engage in talks but engage in talks with an understanding that these talks will lead to a different conclusion than talks of the past,” he said.