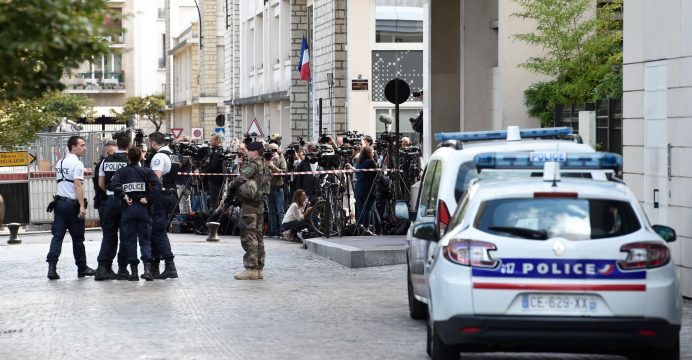 A car rammed into a group of soldiers in a Parisian suburb on Wednesday, injuring six before speeding off and sparking a manhunt that a judicial source said ended with the suspect’s arrest on a motorway.

In an attack that authorities said bore the stamp of terrorism, the driver appeared to have lain in wait for the soldiers in a pedestrian zone near their base in Levallois-Perret.

The affluent suburb on the northwestern edge of Paris is home to France’s domestic counter-terrorism agency. Several dozen troops from Operation Sentinel, launched in the wake of Islamist attacks in Paris in early 2015, are based there, reports Reuters.

The car accelerated into the troops, who were starting their patrol, when they were a few meters away, Interior Minister Gerard Collomb told reporters outside the hospital where the three more seriously injured victims were being treated.

“This was a deliberate act, not an accident,” Collomb said, adding that counter-terrorism investigators had taken up the case.

A judicial source said the unarmed suspect was arrested on a motorway in northern France after. A Reuters witness saw a bullet-riddled BMW at the scene.