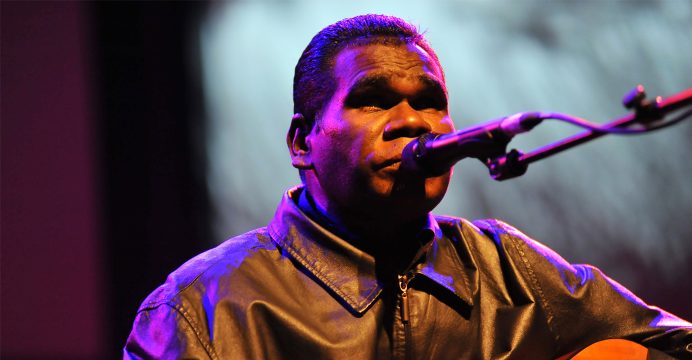 World-renowned indigenous singer Gurrumul has died after a “long battle with illness” aged 46, his management said Wednesday, as Australians hailed his contributions to music.

Born blind, the reluctant star never gave any interviews and was painfully shy, but his music drew worldwide acclaim, despite the fact that he performed in his Gumatj dialect which is understood by only around 3,000 people.

The singer — whose full name is Geoffrey Gurrumul Yunupingu — passed away at the Royal Darwin Hospital, his record label Skinnyfish Music Australia said in a statement.

“Today we mourn the loss of a great Australian, Dr G. Yunupingu who sadly passed away yesterday in Royal Darwin Hospital at age 46 after a long battle with illness,” Skinnyfish said, without giving further details.

Australians, including Prime Minister Malcolm Turnbull, took to social media to pay tribute to the singer.

“Very sad news. Too young, so much left to give. Heart goes out to family.”

Gurrumul collaborated with musicians across the world, including producer Quincy Jones and British giants Elton John and Sting who performed or recorded with him.

He also performed for audiences including Queen Elizabeth II and former US president Barack Obama.

Blind from birth, he emerged from the remote Galiwin’ku community on Elcho Island off the coast of Arnhem Land in Australia’s north to sell over half a million albums worldwide.

But he reportedly struggled with liver and kidney disease through contracting Hepatitis B as a child, with his early death a “stark reminder why we must close the gap of life expectancy for indigenous ppl”, Greens Senator Sarah Hanson-Young tweeted.

“It’s a failure of all of us that we have lost such an amazing human being,” his friend Vaughan Williams told the Australian Broadcasting Corporation.

“I feel he was trapped in the same cycle of bad health that so many indigenous people are trapped in.”

Aborigines, whose cultures stretch back tens of thousands of years, remain the most disadvantaged Australians.

They were believed to have numbered around one million at the time of British settlement, but now make up only about three percent of the total national population of 24 million.

Under Aboriginal custom, the publication of images of a recently deceased person is prohibited.