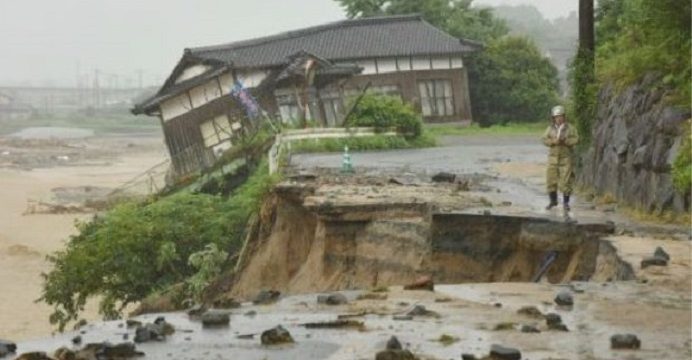 The death toll from heavy rains and flooding in southern Japan has risen to 15, media reported on Saturday, as rescuers continued work to bring out isolated survivors.

Raging rivers overflowing with water and mud have devastated swathes of Kyushu — the southernmost of Japan’s four main islands — after heavy rainfall, sweeping away roads and houses and destroying schools, reports BSS.

Thousands of rescuers have been fighting through thick mud and battling rain to search for missing and stranded people, with more than 600 believed to still be cut off according to Jiji Press.

Jiji and public broadcaster NHK reported the death toll had risen to 15 as more bodies were discovered. The central government announced Friday an official death toll of seven with 22 people unaccounted for. Deep mud and soaked ground on steep hillsides as well as knocked-out bridges have hampered rescue work.

TV footage has shown rescuers strapping people to cables to be lifted up to helicopters to be ferried to safety in evacuation shelters.

Broken trees, their bark stripped away, littered the scenic and verdant landscape like broken matchsticks as thick clouds hovered over green mountains.

Aerial TV footage on Friday showed desperate residents of one isolated area using uprooted trees to spell out “SOS for rescuers to see.

Fallen trees smashed into houses in the hard-hit Fukuoka prefecture city of Asakura, which saw more than 50 centimeters (almost 20 inches) of rain in a 12-hour period to Wednesday night.

“My parents are still trapped with 16 other people in the Kurosawa area and I have absolutely no information about the situation there,” Asakura resident Kayoko Ishibashi told reporters on Friday, referring to a district in the city.

“So I can only wait here in the hope that they will be rescued by helicopter,” she added. “It’s the same for everyone here.”

The government has dispatched some 12,000 police, military, firefighters and coast guard personnel for rescue operations.

Japan’s Imperial Household Agency said that out of consideration for the disaster-hit region, Emperor Akihito’s eldest granddaughter Princess Mako and her fiance decided to postpone Saturday’s scheduled formal announcement of their engagement.