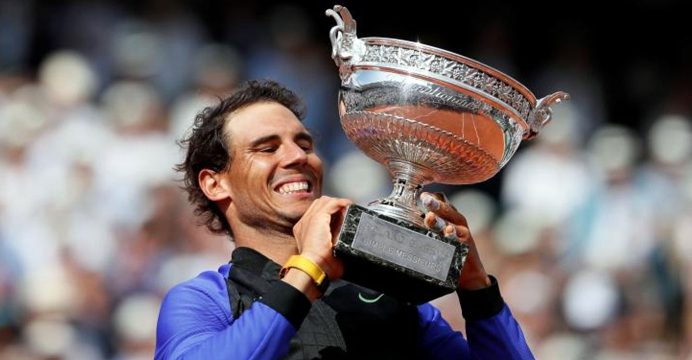 Rewinding the clock to the days when he was untouchable on the crushed brick dust, the 31-year-old turned 2015 champion Wawrinka into a human punchbag, winning in just over two hours.

This title, an unprecedented 10th at a single grand slam in the professional era, was arguably the most impressive of his 15 though as it arrived three injury-plagued years after the last one, without dropping a set and conceding only 35 games in seven matches.

Only Bjorn Borg, who conceded 32 on his way to the 1978 title, has been a more ruthless champion.

Having beaten world number one Andy Murray with a majestic display of power in the semi-final, third seed Wawrinka arrived full of confidence as, at 32, he tried to become the oldest French Open winner since Andres Gimeno in 1972.

But the barrel-chested ‘Stanimal’ was powerless as Nadal turned the final into an exhibition of his clayclourt supremacy — taking his French Open record to an eye-watering 79-2.

As a weary Wawrinka sliced a volley into the net on match point Nadal collapsed on his back on the baseline.

“I’m a little emotional,” Nadal said before getting to clamp his jaws on La Coupe des Mousquetaires. “The nerves and adrenaline I feel on this court is impossible to compare.”

Straw hats and fans were de rigueur for an expectant Court Philippe Chatrier as the final began with temperatures hovering around the 30 degrees Celcius mark — perfect conditions for Nadal’s trademark monstrous topspin game.

Wawrinka, who spent nearly five hours more on court than Nadal to reach the final, looked tentative and heavy-legged although he did have a glimmer in the third game when Nadal was forced to save a break point.