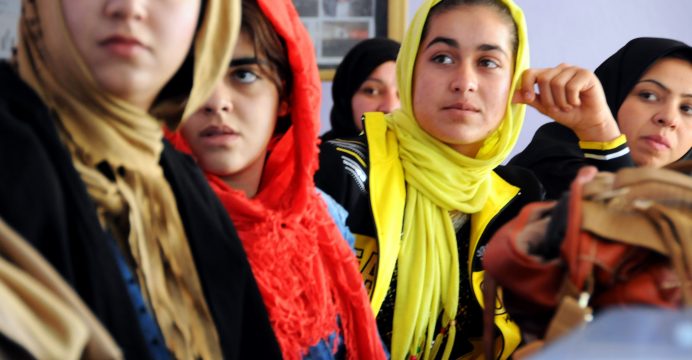 A new TV channel dedicated to women is set to begin broadcasting in Afghanistan, the first of its kind in a country whose media industry, like many areas of society, remains dominated by men.

Zan TV (“Women’s TV”) launches on Sunday with a staff of all female presenters and producers, following a high-profile marketing campaign on billboards in Kabul and on social media, reports Reuters.

Female newsreaders appear regularly on many Afghan channels, but an entire station for women is a novelty. Its arrival highlights the fact that behind the daily stories of violence, change is taking place in Afghanistan, even if it is often slow and patchy.

“I am so happy that this TV station has been created for women because there are women in our society who are not aware of their rights,” said 20-year-old Khatira Ahmadi, a producer at the station.

“So this station represents women and we work to raise the voice of women so they can defend their rights,” she said.

Women’s rights and education as well as media freedom are often cited by the government and foreign aid organizations as among the biggest achievements in the country since the Taliban was toppled in 2001.

Still, Afghanistan is one of the most difficult places in the world for women in the media, and in a poor and war-ravaged country — with a crowded TV landscape of around 40 stations — there is no guarantee of success.

Media entrepreneur Hamid Samar, the founder of Zan TV, said he was banking on potentially large female audiences in big cities like Kabul who are hungry for news and discussion that reflect their own experiences.

“There has been a lot of talk about women’s rights and media rights,” he said. “But we’ve never seen anything special for women and that’s why we’ve done this.”

Zan TV runs on a shoestring using low-cost digital technology and operating out of a basic studio in Kabul, focusing on talk shows along with some programs on health and music.

It relies heavily on a team of mainly young women, many of them students. Youth and enthusiasm make up for what it lacks in experience.