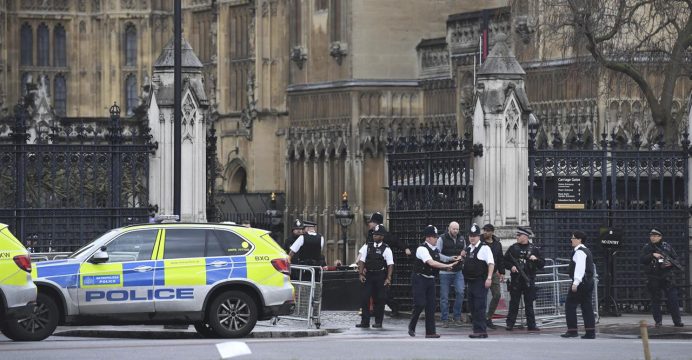 Armed British officers arrested a man carrying knives near Prime Minister Theresa May’s office in London on Thursday on suspicion of preparing an act of terrorism.

The 27-year-old man was detained by counter-terrorism officers on Parliament Street, a stone’s throw from the parliament building and May’s Downing Street office, during a stop-and-search in an ongoing security operation, police said.

No one was injured in the incident, and May was not at Downing Street at the time because she was campaigning in northern England ahead of the June 8 election.

The knife incident came just over a month after a British-born convert to Islam ploughed a car into pedestrians on nearby Westminster Bridge, killing four people, before stabbing to death a police officer in the grounds of parliament.

“Detectives from the Counter Terrorism Command are continuing their investigation, and as a result of this arrest there is no immediate known threat,” police said in a statement about Thursday’s incident.

“The man … was arrested on suspicion of possession of an offensive weapon and on suspicion of the commission, preparation and instigation of acts of terrorism. Knives have been recovered from him.”

A Western security source said the man, from London, was known to counter-terrorism officers and the domestic intelligence agency MI5 before his arrest. Two hours after his arrest, police reopened streets in the Westminster district, indicating they believed there was no further public risk.

A Reuters reporter and photographer saw police apprehending a dark-skinned, bearded man dressed in a hooded, black coat. After he was detained, the man was stood between two armed police officers with his right hand in a loose bandage.