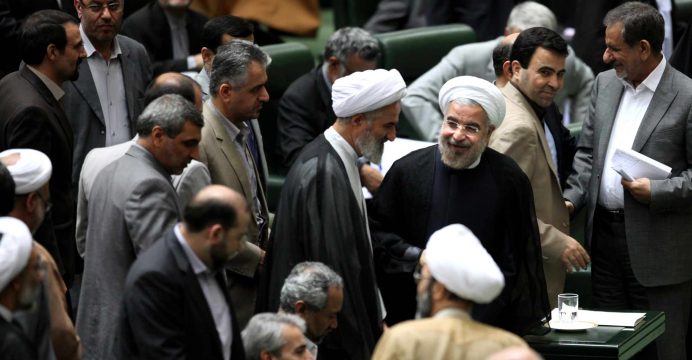 Iran’s Rouhani defends his economic record ahead of May election

Iranian President Hassan Rouhani defended his economic record on Thursday, three weeks ahead of Iran’s presidential election, and called for further engagement with other countries as the key to economic growth.

His remarks contrasted with the view of the country’s ultimate authority Supreme leader Ayatollah Ali Khamenei, who has called on the six presidential candidates not to rely on foreign investment to revive the country’s economy.

The pragmatist president, who is seeking reelection in the May 19 vote, said Iran’s economy had improved since his landslide election in 2013 on a platform of ending the country’s isolation and creating a freer society, reports Reuters

“We should avoid scaring away foreign and domestic investors … we can attract 140 billion dollars investment that can help to tackle unemployment,” Rouhani said in a live radio programme.

“The living standards of Iranians have improved … incomes of pensioners and those on welfare support have increased in the past four years.”

Khamenei and his hardline allies have criticized Rouhani’s policy of rapprochement with the West since Iran reached a nuclear deal with six major powers in 2015 that ended Tehran’s years of political and economic isolation.

Khamenei has ruled out any further rapprochement with the United States since that deal, under which Iran curbed its nuclear programme in exchange for lifting of sanctions.

“Four years ago, I promised our people to end Iran’s diplomatic isolation … we cannot resolve our economic problems only by chanting slogans,” Rouhani said, referring to his hardline challengers’ campaign promises of creating millions of jobs per year. “To tackle unemployment, we need investment.”