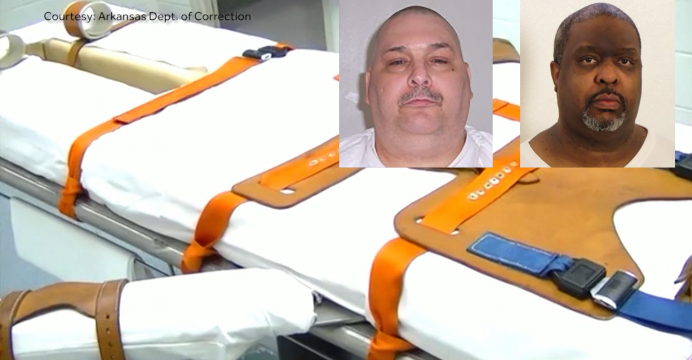 The state of Arkansas has executed two prisoners on death row after the US Supreme Court rejected their last-minute appeals.

Jack Jones and Marcel Williams were both sentenced to death for rapes and murders committed in the 1990s.

Arkansas controversially scheduled eight sudden executions when it found out its supply of a drug used in lethal injections expires in late April.

It is the first double execution on the same day in the US for 17 years.

The state’s decision to plan eight executions in just 11 days was prompted by the realisation that its stockpile of midazolam – one of three drugs used together in lethal injections – would expire at the end of the month.

Human rights groups, defence lawyers, and drug companies all objected to the decision.

But on Thursday, Ledell Lee became the first person to be executed in Arkansas since 2005, after the US Supreme Court rejected a challenge to the scheduling of the executions and the Arkansas Supreme Court overturned a ruling blocking the use of a different drug.

Both Jack Jones and Marcel Williams had filed their own legal challenges before their executions on Monday night.

Attorneys for Jones had argued he could suffer from a “torturous death” because he may be resistant to midazolam.

Lawyers for Williams had said it might be difficult to find a vein on their client for the lethal injection because of his 400lb (180kg) weight.