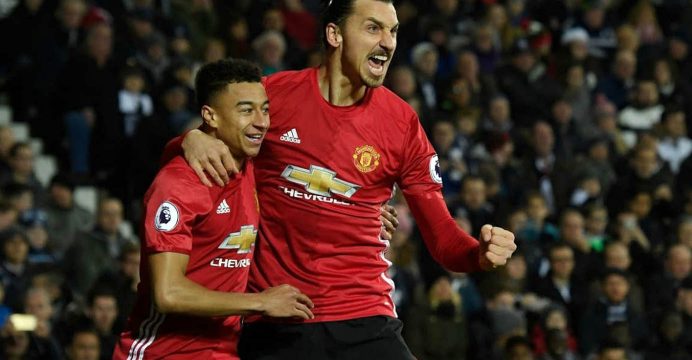 Jose Mourinho admitted it will be “really hard” for veteran striker Zlatan Ibrahimovic to recover from his season-ending knee ligament injury.

The Manchester United manager was talking after his side had recorded an impressive 2-0 victory at Burnley just three days after Ibrahimovic and defender Marcos Rojo suffered knee injuries which require surgery during a midweek Europa League win over Anderlecht.

“Everyone is very sad. We were thinking about them. They have to be strong,” said Mourinho.

“Unfortunately they won’t be the first or last players to get an important injury.

“No player deserves to be injured but I think in this case it’s even more sad because Zlatan, in this stage of his career it’s really, really hard.

“And Marcos probably at this moment in his career is playing very well for us and also finally getting a position as central defender in the international team, so we’re really sad for them.”

Reports have suggested that, given his age, Ibrahimovic may not play at the top level again — his United contract is up at the end of the season — although his manager did not want to become involved in such speculation.

“Yeah I know but I think it’s for the medical department to be more specific and to evaluate over the next few days to seek an expert’s opinion and we have to wait and see for that,” he said.

“I don’t care about it in this moment, I just want the player to recover the best he can and we’ll see about it. Honestly, I’m not sad for the team, I’m not worried about the impact of not having them.

“I don’t care about it, I just think about them, and like everybody I’m really sad.”

United’s win at Burnley came with goals from Anthony Martial and Wayne Rooney with the former responding well to midweek comments from his manager that questioned his work ethic.

“Yes,” said Mourinho when asked if Martial had responded as he wished.

“Of course, it was a very good performance by him — with the ball, without the ball, in defence, matched in the middle against two strong central defenders and without anyone just behind him supporting him.”

The win sets up an intriguing Manchester derby trip to City on Thursday in which a United victory would lift them above their rivals, although Mourinho admitted he will rest players with an eye on the Europa League semi-final with Celta Vigo.

“And let’s see what we can do.

“Of course it’s important to play in the Champions League but this club wants trophies. We have a 25 percent chance to win the Europa League and have to put everything into it we can.”