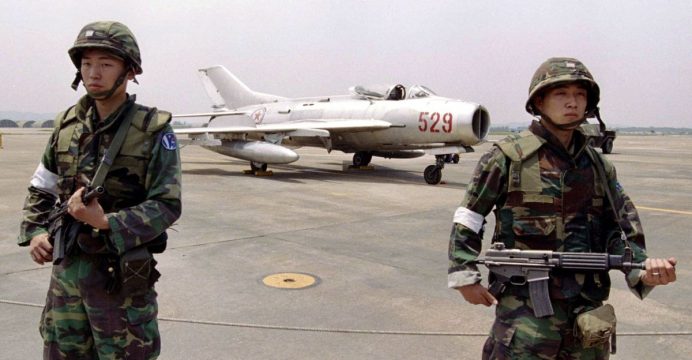 South Korea said on Friday it was on heightened alert ahead of another important anniversary in North Korea, with a large concentration of military hardware amassed on both sides of the border amid concerns about a new nuclear test by Pyongyang.

U.S. officials said there was a higher-than-usual level of activity by Chinese bombers, signalling a possible heightened state of readiness by reclusive North Korea’s sole major ally, although the officials played down concern and left open a range of possible reasons. Beijing denied its aircraft were on an increased level of alert.

In Russia, the RIA news agency said a Kremlin spokesman declined to comment on media reports Russia was moving military hardware and troops towards the border with North Korea, reports Reuters.

U.S. and South Korean officials have been saying for weeks that the North could soon stage another nuclear test in violation of United Nations sanctions, something both the United States and China have warned against.

Top envoys from the United States, South Korea and Japan are due to meet on Tuesday, South Korea’s foreign ministry said, to “discuss plans to rein in North Korea’s additional high-strength provocations, to maximize pressure on the North, and to ensure China’s constructive role in resolving the North Korea nuclear issue”.

South Korea and the United States have also been conducting annual joint military exercises, which the North routinely criticises as a prelude to invasion.

“It is a situation where a lot of exercise equipment is amassed in North Korea and also a lot of strategic assets are situated on the Korean peninsula because of the South Korea-U.S. military drills,” Lee told a briefing.

“We are closely watching the situation and will not be letting our guards down.”

U.S. Defense Secretary Jim Mattis said on Friday North Korea’s rhetoric was provocative but he had learned not to trust it.