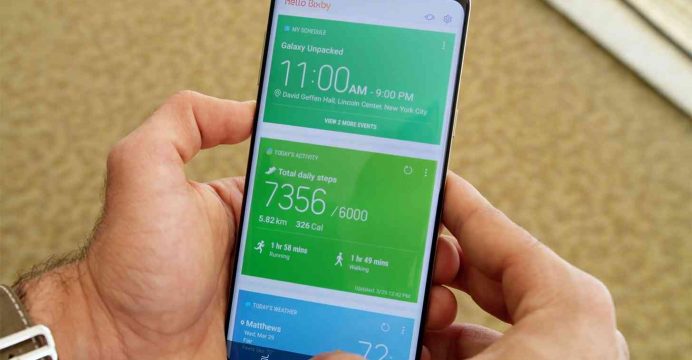 Samsung Galaxy S8 will launch without voice commands in Bixby

The key highlight of the recently launched flagships – Samsung Galaxy S8 and S8+ apart from Qualcomm’s latest Snapdragon 835 processor, infinity display, is the newly designed voice assistant – Bixby. This is an intelligent voice-powered digital assistant that the South Korean smartphone maker designed, and said would show up in the Galaxy S8 and S8+ when the devices go out for sale.

Samsung during the launch event of S8 and S8+ mentioned that both the smartphones will be shipped with a separate button dedicated for Bixby and make come with voice command features. But, latest reports spotted in the wilds doesn’t say that at all and suggests that it may not be the case any longer, as Samsung is apparently skipping the voice command feature that Bixby was initially supposed to come with. In a report coming from Deccan Chronicle states, “Samsung is delaying the launch of Bixby voice assistant, a key feature that was expected to debut on the new flagship smartphone Galaxy S8 when they ship to consumers on April 21.”
However, the report further states that the South Korean smartphone manufacturer didn’t mention the reason for the delay. Samsung in a statement states, “Key features of Bixby, including Vision, Home and Reminder, will be available with the global launch of the Samsung Galaxy S8 on April 21.” Although tipping the global launch of the voice command feature in Bixby for April 21, Samsung in a report states that Bixby will roll out to consumers only by later this spring. “Bixby Voice will be available in the US on the Galaxy S8 later this spring,” says Samsung in a statement.
Bob O’Donnell, an analyst and consultant with Technalysis Research told AFP that, “It’s not talking yet.” This clearly indicates that Samsung’s Bixby needs a lot more work further, as the voice command feature of the assistant, which is one of the key highlight of the voice assistant – Bixby may not be working properly as of now. However, Samsung is working hard on making it work. Bob further states, “They have room to expand and grow.”
Another independent analyst, Richard Windsor, who writes the Radio Free Mobile blog further commenting on Bixby told AFP that, “Bixby is trying to do things a little differently but careful assessment of what Samsung demonstrated shows a service that has very little intelligence at all.” Furthermore, Roger Kay of Endpoint Technologies Associates also highlighted the fact that Bixby may face a tough challenge from its competitors like Apple’s Siri, Amazon Alexa, Microsoft’s Cortana and Google Assistant. Kay says, “You can’t build these things overnight and it would take years to create something as developed as Siri.” With Bixby, Samsung is gearing up to fight a tough battle and win over the entire voice-activated virtual assistant market.
Samsung Galaxy S8 and S8+ are launched on March 29, are expected to roll out shipping by the end of this month, and may be on April 21, but without the voice command features in Bixby.