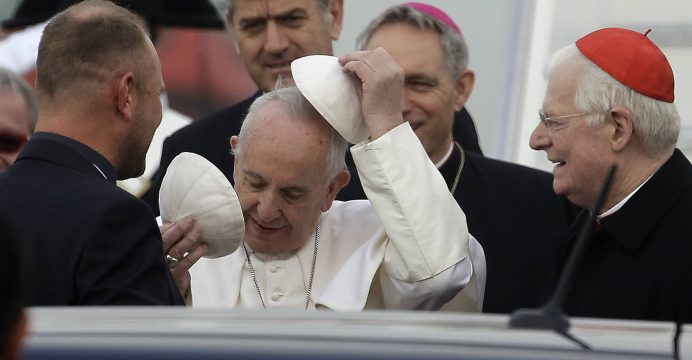 History of ‘papal tyranny’ catches up with pope in northern Italy

Perhaps the last thing Pope Francis expected to find during a visit to the northern Italian city of Carpi on Sunday was a huge 136-year-old plaque honoring the victims of “papal tyranny”.

The pope passed right by the plaque while standing in his white open popemobile after saying Mass in a square a few dozen meters away during a day-long visit to an area hit by earthquakes in 2012, reports Reuters.

Put up in 1881 on the side of castle in the center of town, the marble plaque measuring about 1 meter by 2 meters commemorates the 1870 unification of Italy, which it says “emancipated human thought from papal tyranny.”

The popemobile was moving very slowly as it passed so he could shake hands with faithful and kiss babies but it was not clear if he read the words on the plaque, one of many reminders in Italy of the country’s often violent past.

Until 1870, Italy was made up of a jumble of kingdoms, duchies, city-states, republics and the militarily powerful Papal States, a large swathe of territory running from the Mediterranean to the Adriatic.

Anti-clericalism was rife in the Papal States and border areas at the time because of the papacy’s levying of taxes to fill its coffers and the Church’s often suffocating influence on people’s personal freedoms.

Carpi was part of the Duchy of Modena, which sided with the unification forces against the papacy, whose territory was reduced to the 108 acres of Vatican City after the wars.

The region northwest of Bologna that the pope visited was hit by twin quakes in 2012, killing 28 people. Many family-run factories and food processing plants were severely damaged, dealing a devastating blow to the local economy in the area famous for its Parmesan cheese and Parma prosciutto.

The rebuilding plan has been held up as exemplary to other Italian regions because it brought together business leaders, the Church and politicians to decide priorities.