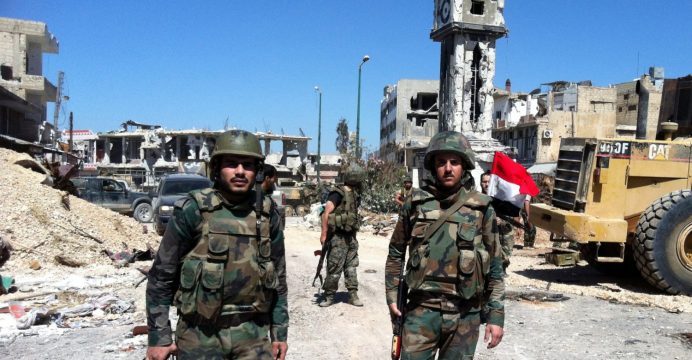 Warplanes pounded rebel-held areas north of the Syrian city of Hama on Thursday in an escalation of air strikes, a rebel official and a monitor said, as government forces fought to reverse the insurgents’ biggest assault in months.

The Syrian Observatory for Human Rights and a doctor said air strikes near the town of Latamneh, northwest of Hama, had led several people to choke, saying it was a sign of a gas attack. A Syrian military source denied the army had used any such weapons, branding the reports as rebel propaganda, reports Reuters.

The area is of vital importance to President Bashar al-Assad, who with the support of Russia and Iran has the military upper hand there.

The observatory, a Britain-based war monitoring group, said jets had hit several rebel towns on Thursday, including Soran and Khattab, both captured by insurgents at the start of the offensive.

The Syrian military source said the army was conducting attack operations in the area and had seized the initiative back from the rebels.

Speaking to Reuters from Turkey, Abdallah Darwish, head of the health authority for rebel-held parts of Hama province, said air strikes in the south of Latamneh on Thursday morning had injured many people.

“The bombardment had a substance that caused intense irritation, heavy foaming from the mouth, and constricting pupils,” said Darwish, citing his medical staff on the ground.

The Syrian military source said the allegations that government forces were using chemical weapons were “devoid of truth”.

“The army has not, will not, and does not need to use these weapons,” the source said.

A joint inquiry for the United Nations and the global chemical weapons watchdog has previously accused government forces of toxic gas attacks. Damascus has repeatedly denied using such weapons during the six-year-old war.

Mohammed Rasheed, a spokesman for the Jaish al-Nasr rebel group fighting in Hama under the FSA banner, said government and Russian “air strikes have been ramped up terribly”.

“The Russian warplanes have not stopped since last night,” he said.

While the rebels have been on the back foot in recent months, their latest attack has shown the challenges facing the army and allied militia in fighting on numerous fronts at once.