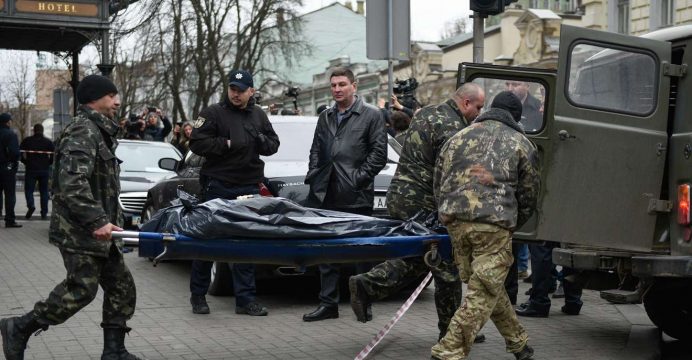 Ukraine accused Russia of “state terrorism” after a former Russian lawmaker and key witness in a treason case against former leader Viktor Yanukovich was shot dead in broad daylight outside a hotel in central Kiev on Thursday.

Former parliamentarian Denis Voronenkov was killed by an assailant who was armed with a pistol and later died in hospital after being shot in the chest and head by Voronenkov’s bodyguard, police said. The assailant’s identity was not disclosed, reports Reuters.

Voronenkov had also spoken out against Russia’s annexation of Crimea in March 2014, although he voted for the move at the time.

Ukraine President Petro Poroshenko said the killing “is an act of state terrorism on the part of Russia, which (Voronenkov) was forced to leave for political reasons.”

“Voronenkov was one of the main witnesses of Russian aggression against Ukraine and, in particular, the role of Yanukovich regarding the deployment of Russian troops to Ukraine.”

Relations between Kiev and Moscow are at an all-time low after Russia annexed the Crimean peninsula in March 2014 and the subsequent outbreak of separatist fighting in Ukraine’s eastern Donbass region, which has killed more than 10,000 people.

Poroshenko said it was “no accident” that Voronenkov was shot on the same day as a warehouse storing tank ammunition was blown up at a Ukrainian military base.

“We believe that all the falsehoods that can already be heard about much-hyped Russian involvement are absurd,” Kremlin spokesman Dmitry Peskov was quoted as saying about the killing.

Voronenkov, 45, had been placed on a Russian federal wanted-list in connection with an alleged $5 million property fraud. He came to Ukraine with his wife, opera singer Maria Maksakova, who was also an MP.

Voronenkov was gunned down on his way to meet another former Russian parliamentarian, Ilya Ponomarev, who was the only member of the Duma who voted against the annexation of Crimea.

“There’s an obvious theory – I’ve said that Voronenkov wasn’t a crook, but a deadly dangerous investigator for Russian officials,” Ponomarev wrote on Facebook.

Television footage showed Ponomarev and Maksakova leaving the scene in a car together with Ukraine’s General Prosecutor Yuriy Lutsenko.

“He had provided investigators of the military prosecutor’s office with highly important (witness) testimony for the case. This was a typical show execution of a witness by the Kremlin,” Lutsenko said.