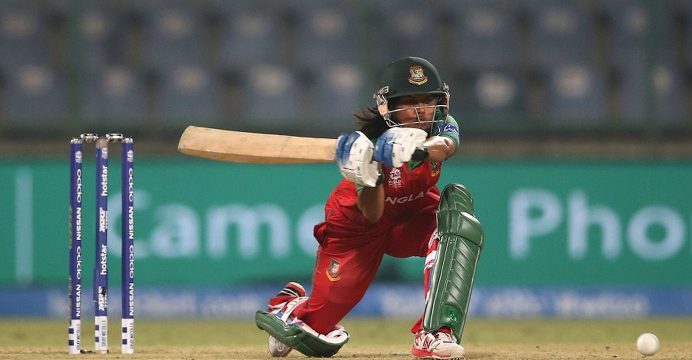 Chasing a winning target of 198 runs set by Sri Lanka, Bangladesh faced early batting debacle as they were tottering 68 for 5 in 21 overs. Then abrupt rain forced to stop the play. After that it was not possible to resume the play and Sri Lanka won the match by D/L method.

With this win, Sri Lanka got the ticket of the final round of World Cup along with India, South Africa and Pakistan in the ICC Women’s World Cup to be held this summer in England.

India dominate the points table with eight points from four matches while South Africa placed in second position with six points playing the same number of the matches.

In the Bangladesh’s dilapidated innings, Nigar Sultana (24) and Shaila Sharmin (21) were the two batsmen who able to reach the double figure.

Earlier, Bangladesh were rocked in their chase of 198 when they lost early wickets to stumble at 30 for 3 in nine overs against Sri Lanka in the ICC Women’s World Cup Qualifier, 8th Super match at Nondescripts Cricket Club ground, Colombo today.

Earlier, Bangladesh restricted Sri Lanka at moderate total of 197 for 9 after 50 overs, after they won the important toss and invited Sri Lanka to bat first.

Sri Lanka looked like they had things under control at 107 for 2 inside 33 overs. However, they lost wickets like nine pin balls and failed to cross 200 in the end. Chamari Atapattu held the Sri Lankan innings together with her impressive 84 from 114 balls.

She cracked eights fours and a six in her timely knock when wickets where falling at the other end. Hasini Pererawas the other notable scorer for the host with 32 from 72.

Salma Khatun was the pick of Bangladesh bowler as she grabbed three wickets conceding 18 in nine overs.