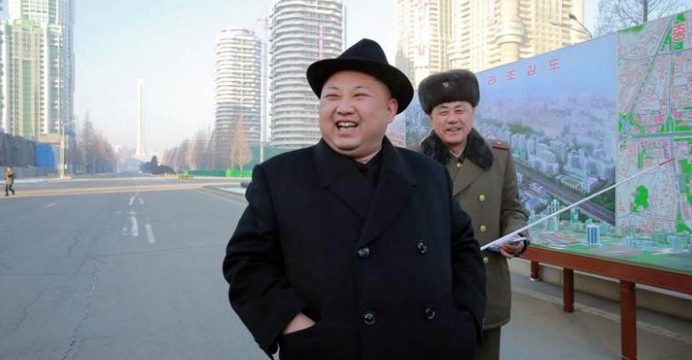 North Korea fired a ballistic missile into the sea off its east coast early on Sunday, South Korea’s military said, the first time the isolated state has tested such a device since the election of U.S. President Donald Trump.

U.S. and South Korean military sources said the missile did not appear to be an Intercontinental Ballistic Missile (ICBM) given its flight range.

Trump had been briefed on the missile launch, and the White House is continuing to monitor the situation, a White House official said on Saturday. Trump did not respond to a shouted question from a reporter about the launch as he posed for pictures with visiting Japanese Prime Minister Shinzo Abe ahead of a dinner in Florida.

The missile was launched from an area named Panghyon in North Korea’s western region just before 8 a.m. (2300 GMT Saturday) and flew about 500 km (300 miles), the South’s Office of the Joint Chiefs of Staff said.

“Our assessment is that it is part of a show of force in response to the new U.S. administration’s hardline position against the North,” the office said in a statement.

The South’s military said Seoul and Washington were analyzing the details of the launch. Yonhap News Agency said the South Korean military was assessing the launch to confirm whether it was a Musudan intermediate-range ballistic missile, which has a designed range of 3,000 km (1,800 miles).

Japan’s chief cabinet secretary, Yoshihide Suga, said the missile had apparently landed in the Sea of Japan but not within the country’s exclusive economic zone (EEZ).

The U.S. military also said it had detected a missile test launch by the North and was assessing it, according to a U.S. defense official in Washington.

The North tried to launch a Musudan eight times last year but most attempts failed. One launch that sent a missile 400 km (250 miles), more than half the distance to Japan, was considered a success by officials and experts in the South and the United States.

Sunday’s launch comes a day after Trump held a summit meeting with Abe and said he agreed to work to ensure strong defense against North Korea’s threat.