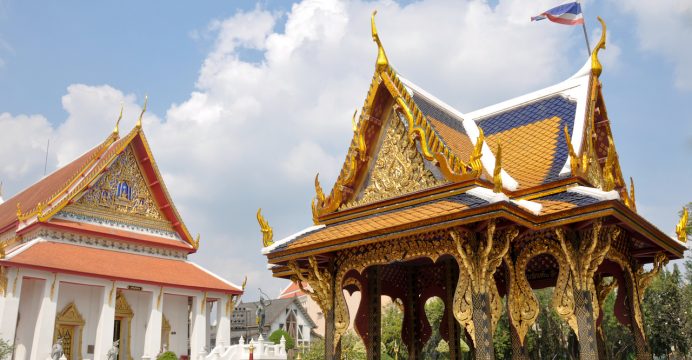 Inch by gilded inch, the chariot to take Thailand’s late king on his last journey is being restored by workers in Bangkok in a labor that will last months.

Built of wood and decorated with gold and mirrors, the 13.7 tonne chariot is 18 meters (yards) long, 11.2 meters high and 4.8 meters wide, reports Reuters.

Pulled by 216 men, it will carry the ornate urn containing King Bhumibol Adulyadej’s body to the site of the cremation at the Sanam Luang ground outside the Royal Palace.

The king died on Oct. 13 after seven decades on the throne, plunging Thailand into mourning, which for many Thais will last a year. No date has yet been set for the cremation, but it will not take place before October.

Known as the “Great Victory” Chariot, the vehicle is believed take the divine back to heaven. Renovation began in January and is due to be completed by September.

The chariot was first built in 1795 in the time of King Rama I for the cremation of his father. King Bhumibol was Rama IX in the Chakri dynasty. He has been succeeded by his son, King Maha Vajiralongkorn Bodindradebayavarangkun, known as Rama X.

The chariot has been used 25 times, most recently in 2012 for the cremation of Princess Bejaratana Rajasuda, the late king’s cousin.