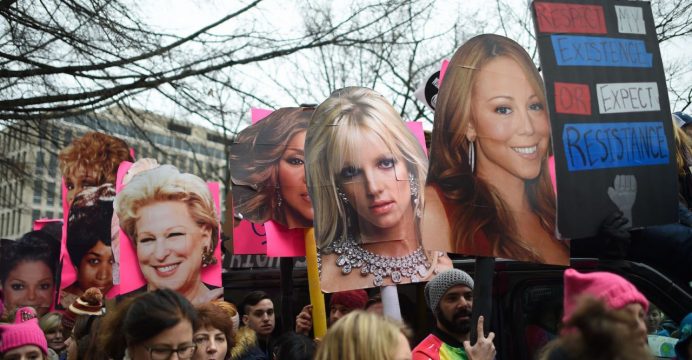 Prime Minister Theresa May promised on Sunday to challenge any “unacceptable” talk when she meets President Donald Trump later this week, as she tries to secure Britain’s “special relationship” with the new U.S. administration.

May, Britain’s second female premier, made the comments after thousands of women marched in London on Saturday to protest about Trump’s attitude to women, joining demonstrations held in major cities across the globe, reports Reuters.

She told the BBC she would use Friday’s meeting in Washington to discuss issues including future U.S.-UK trading relations, following Trump’s promise to put “America first” in his inauguration speech on Friday.

Since Britons voted last year to leave the European Union, May’s government has been keen to deepen ties with the United States and other nations outside Europe to show that Brexit will not diminish its standing in the world.

May indicated she would not shy away from any difficult issues, when asked about the controversy over Trump’s comments on women. This erupted last year during the presidential election campaign over a 2005 video in which he boasted about grabbing women’s genitals.

“I’ve already said that some of the comments that Donald Trump has made in relation to women are unacceptable, some of those he himself has apologized for,” May said.

“When I sit down (with Trump) I think the biggest statement that will be made about the role of women is the fact that I will be there as a female prime minister,” she said. “Whenever there is something that I find unacceptable I won’t be afraid to say that to Donald Trump.”

Trump’s election has raised questions over the future of the so-called “special relationship” that has underpinned close British-American ties for decades, but the new U.S. leader has said he believes Brexit will be “a great thing”.

May, who initially struggled to build relations with Trump’s team, said she would also use the meeting to discuss the NATO defense alliance and challenges such as defeating terrorism and the conflict in Syria.

Becoming one of the first world leaders to meet with Trump following his inauguration will be viewed as a coup for May, who was perceived to have been snubbed by the billionaire following his election when he spoke first to nine other world leaders.

She will be trying to improve relations with Trump after he irritated the British government by meeting Nigel Farage, an outspoken anti-EU campaigner and critic of May, and saying he would be a good choice for Britain’s ambassador to Washington.

Opposition Labour leader Jeremy Corbyn cast doubt on whether Trump, who has promised to protect American jobs and industry from foreign imports, would offer Britain much.

“There were no signs of any special relationship in Donald Trump’s inauguration speech. Quite the opposite, it was ‘America first, America only’,” he told Sky News.

“The idea that Donald Trump is suddenly going to roll over and offer some trade deal with Britain which doesn’t have strings attached … I think she needs to be extremely careful.”

British newspapers were divided on the visit, with the Sunday Telegraph reporting Trump calls May “My Maggie”, referring to her predecessor Margaret Thatcher, who enjoyed a close relationship with her U.S. counterpart Ronald Reagan in the 1980s.

The front page of the Mail on Sunday however, ran the headline: “Cut out your sexist insults, Mr President”.