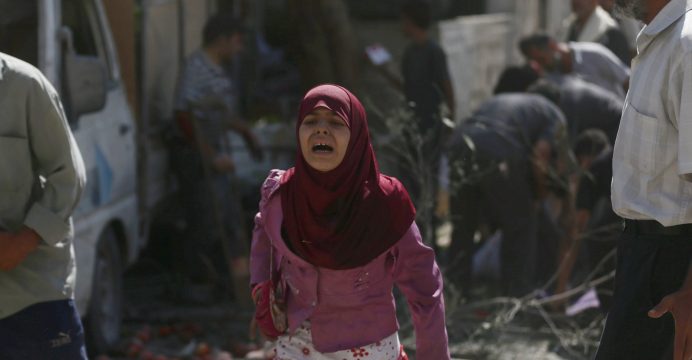 Iraqi Shi’ite forces fighting Islamic State west of Mosul aim to clear a large strip of land on the border with Syria to prevent the militants melting into the remote desert region and using it as a base for counter attacks, a spokesman said on Tuesday.

The Popular Mobilisation fighters – mainly Shi’ite, Iranian-backed paramilitary groups who form part of a wider Iraqi force waging the eight-week Mosul campaign – have deployed west of the city to cut the route to Islamic State-held territory in Syria, reports Reuters.

They have taken an air base south of the town of Tal Afar, about 60 km (40 miles) west of Mosul, and linked up with Kurdish peshmerga fighters to seal off the town’s western flank. Jafaar Hussaini said the Kata’ib Hezbollah, one of the Shi’ite armed groups, would advance further west to clear the border region where he said the militants had hidden many weapons stores for future use.

“The key objective is to … make sure that the terrorists lose the ability to regroup and launch counter attacks against advancing forces,” said Hussaini, speaking by telephone from a desert area near Tal Afar.

Kata’ib Hezbollah is one of the two main Shi’ite groups fighting west of Mosul. A spokesman for the Badr militia, the other group, said it was targeting villages around Tal Afar to “surround Daesh (Islamic State) and tighten the noose around them”.

While the army advance in east Mosul, where soldiers have been constrained by street-by-street fighting and a built-up urban battlefield, Hussaini said progress in the western region was slow because the Popular Mobilisation forces had to clear dozens of villages scattered over a wide area.

The forces are still 60 km from the frontier with Syria, he said. “We are targeting full control of the desert areas along the Syrian border”.

Defeating Islamic State in Mosul, the largest city under its control in Syria or Iraq, would deal a heavy blow to its self-styled caliphate covering parts of both countries, and could see it return to more covert militant operations.

Clearing the remote border region, which has long been a stronghold of the ultra-hardline Sunni militants, would make it more difficult for them to continue operating in northern Iraq.

Since the Popular Mobilisation forces closed off Mosul from Syria, residents in Islamic State-held districts of the city say fresh food has become scarce and prices have soared.

“The city has never seen these prices,” a resident from the west side of the city, which is still completely under Islamic State control, told Reuters by telephone.

“For a barrel of heating fuel the price has reached a million dinars ($850) – it used to be sold for 150,000 dinars,” he said, adding that food prices had risen four or five fold, despite efforts by the militants to punish traders they accuse of hiking prices purely for profit.

One trader said that no fresh fruit or vegetables other than potatoes and onions had reached the city in the past week. “Residents are worried how they can get bread. If the siege continues at this level many people will die from lack of food,” he said.

In the east of the city, where Iraq’s elite Counter Terrorism Services have made slow progress in a grueling fight, some civilians fled the front lines and sought sanctuary in areas now under army control.

“We are very happy even though we have left behind us everything we own. The house, the car and our possessions,” said one resident of Muthanna district, who escaped with his family to stay with a relative in the nearby Zahra neighborhood.

“What’s important is that we escaped death and hell”.

He said many people in Muthanna had been killed.