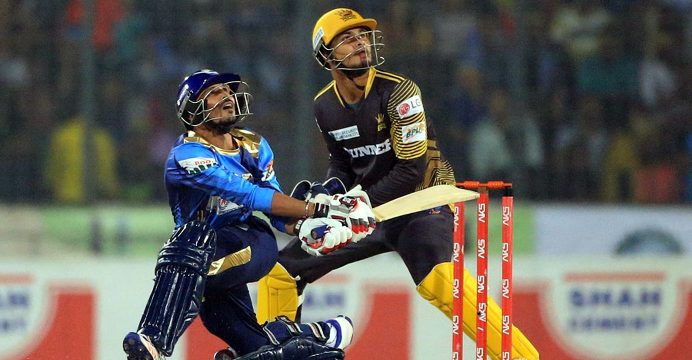 Despite the early loss of opener Nurul Hasan for 5, another opener Moninul Haque (27) and one down Sabbir Rahman (26) kept the momentum for Rajshahi contributing 47 runs for the second wicket stand, but after their departure, Rajshahi could not come back in the match losing wickets in regular intervals in the face of tight bowling display by Dhaka Dynamites bowlers.

Rajshahi Kings lost their remaining seven wickets adding only 37 runs in the scoreboard.

Earlier, put to bat first by Rajshahi, Dhaka Dynamites rode on a late blaze by Kumar Sangakkara to post a competitive 159 for 9 from their allotted 20 overs.

After coming in at number five, Sangakkara was the ninth wicket to fall in the last over for a 33-ball 36 runs with two boundaries and a over boundary all hit in the last seven balls.

Opener Evin Lewis top-scored in the Dhaka’s innings with a 31-ball off 45 runs to steer Dhaka to 83 for four in the 11th over, but his fall to Forhad Reza and Dhaka’s subsequent struggles — they scored just 33 runs in the five overs following Lewis’s dismissal — made it seemed like Dhaka would struggle to cross 150.

Forhad Reza was the most successful bowler for Rajshahi as he bagged three wickets conceding 28 runs.