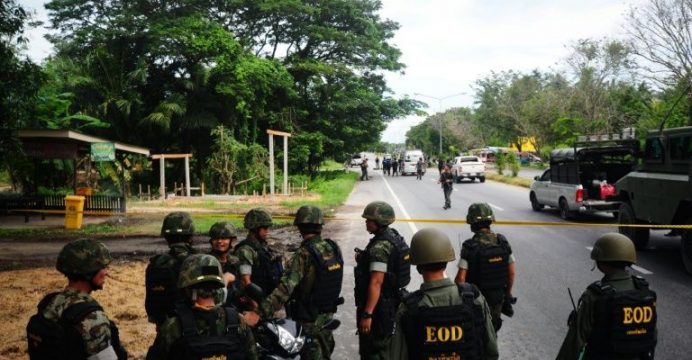 Six people were gunned down over 24 hours by suspected militants in a string of separate shootings in Thailand’s insurgency-plagued southern provinces, authorities said on Wednesday.

The kingdom’s far south has witnessed a Malay-Muslim insurgency that has claimed thousands of lives in the past 12 years with both militants and Thailand’s military accused of rights abuses, reports BSS.

Bombs and assassinations are the near-daily reality for civilians in the area, which is heavily patrolled by soldiers and police. The killings all took place on Tuesday, a police statement said.

The first fatality was a village chief, found at his home in the early hours of the morning shot in the head in southern Pattani province’s Yaring district.

Soon afterwards a couple — one of whom was a government militia member — were gunned down as they rode a motorcycle in nearby Nongchik district.

Later in the day another village chief and a Muslim civilian were shot dead in Pattani province in two separate incidents. A sixth civilian — a Muslim man — was gunned down in neighbouring Narathiwat province.

Pattani police commander Major-General Thanongsak Wangsupa told AFP he believed the attacks were in retaliation for a series of militant arrests in the last few days.

“We detained around eight people under the emergency law,” he said.

Thailand annexed the three southernmost Muslim Malay provinces more than a century ago and they have long chafed under rule from Bangkok.

The latest insurgency broke out in 2004. Some 6,700 people have since died, the majority civilians, caught between the rebels and Thai security forces.

The insurgency usually fails to grab international headlines but a spate of bomb attacks on tourist sites in August sharpened the focus on the conflict.

The people wanted for those assaults, which killed two people, all come from the Thai south, raising fears insurgents could eventually expand their highly localised campaign.

Peace discussions continue to stagger on, with Thai authorities unconvinced their rebel interlocutors have command and control over militant foot soldiers.

Meanwhile the rebels do not believe the Thai junta is ready to hand the south a substantial level of political autonomy — a key step towards an ultimate end to the violence.