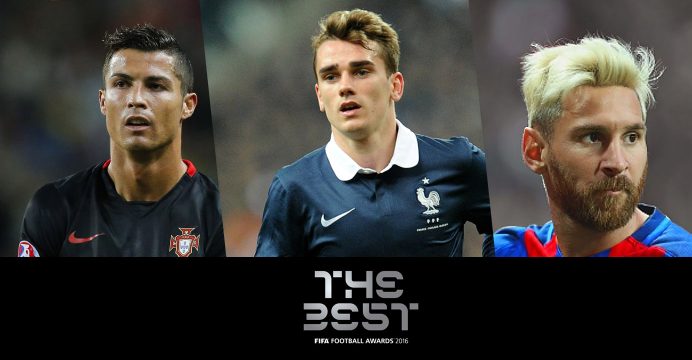 Who will be The Best? FIFA has today announced the final contenders for The Best FIFA Football Awards™. The winners will be crowned in Zurich on 9 January 2017.

The winners of The Best FIFA Football Awards 2016 will be determined through a combined voting process, in which 50 per cent of the decision is based on the votes of captains and head coaches from national teams all around the globe. The other 50 per cent is split between an online public ballot of football fans, and submissions from a selected group of media representatives from all around the world.

The voting procedure for each of the awards has been supervised and monitored by the independent observer PricewaterhouseCoopers (PwC) Switzerland.

In addition, the three nominees for The FIFA Puskás Award 2016 for the “most beautiful goal of the season” have also been announced. The three goals still in the race are Marlone (Brazil/Corinthians), Daniuska Rodriguez (Venezuela/Venezuelan under-17 women’s national team) and Mohd Faiz Subri (Malaysia/Penang). The public voting on FIFA.com for this category will close on 9 January 2017.

All of the awards, including The FIFA Fair Play Award and The FIFA Fan Award will be presented at The Best FIFA Football Awards ceremony at the Zurich TPC studios on 9 January 2017, which will be streamed live on FIFA.com and FIFA on YouTube.