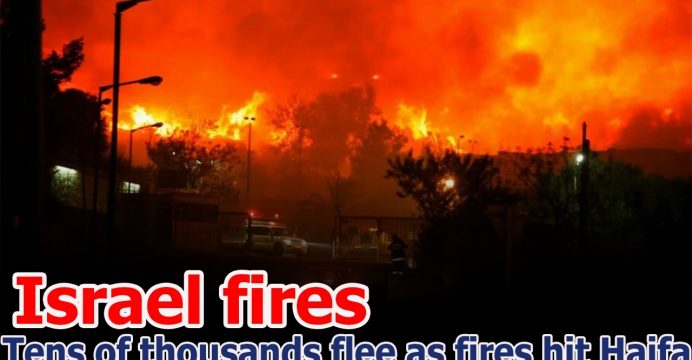 Fires continue to rage throughout israel on the sabbath

Fires, many of them arson set by Palestinian terrorists, raged across Israel for the fifth straight day, shutting down the Jerusalem Tel-Aviv Highway on Saturday, and burning over 32,000 acres of forest all across the country. The damage so far is approximately 30 percent worse than the Carmel Forest fire of 2010. The area affected includes the Judean Hills national park and the Kfir natural reserve.

On Friday night, arsonists set fires in three separate locations in the town of Neve Ysuf in Samaria. All 350 families were evacuated. 15 homes were completely destroyed and 25 others were damaged. Four people were injured in the blaze.

Thanks to our #Europe-an friends for their support in fighting the fire in #Israel pic.twitter.com/I6ea94U0GJ

Also on Friday night, arsonists set fire to Bet Meir outside of Jerusalem. The residents were evacuated. Several arsonists were seen fleeing the scene, and one suspect was arrested.

Residents of Nataf near Jerusalem were evacuated on Friday for the third time in four days. They returned to their home on Saturday when the blaze was brought under control.

Fires also broke out near the  settlements of Dolev, Alfei Menashe and Karnei Shomron. Residents were not evacuated and no damage was reported. A fire was also reported near Harashim in the Galilee. Over the past 24 hours five separate fires were reported in the Churchill forest near Nazareth Illit.

On Friday, 60,000 Haifa residents were permitted to return to their homes. City officials reported that over 600 homes were damaged in fires, with over 400 of them said to be unlivable and 37 completely destroyed.

Three people were critically injured and nine others were moderately injured on Saturday morning in a fire in Ma’ale Adumim.

Ten Palestinians have been arrested on suspicion of arson. Army Radio reported are that at least 6 of those arrested were Palestinians staying in Israel illegally.

“These are very simple terror attacks,” Alsheich told Army Radio. “Generally the attackers themselves know about it only a few minutes beforehand, so we can’t make preventative arrests.”

Fire-fighting planes arrived in Israel from Cyprus, Bulgaria, Greece, Croatia, Italy, Turkey and Russia. 69 fire-fighters arrived from Cyprus on Saturday to help fight the fires. Eight firetrucks and 40 firemen from the Palestinian Authority joined in the effort. Jordan is sending firetrucks to Israel, and Egypt is sending two firefighting helicopters.

A Boeing 747 converted for use in firefighting, nicknamed the Supertanker, arrived in Israel Friday night after a 14 hour flight from Nevada. It is the largest aerial firefighting aircraft in the world and is capable of carrying up to 19,600 gallons of retardant or water. Contracted from the company Global Super tanker, it is the only firefighting aircraft capable of operating at night.