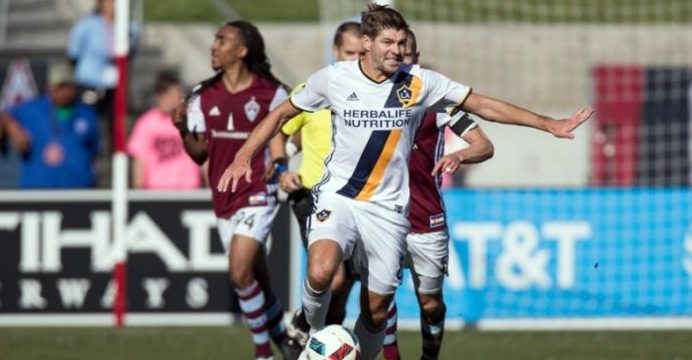 Former Liverpool and England captain Steven Gerrard will leave Los Angeles Galaxy and take time out to consider his next move, the midfielder said on Tuesday.

Gerrard, who joined the MLS club after leaving Liverpool in 2015, confirmed he would not return to play for the Galaxy in 2017 following the conclusion of his contract.

“When I left Liverpool, I came to Los Angeles with the goal of helping the Galaxy lift another MLS Cup,” the 36-year-old Gerrard said in a statement on the Galaxy website.

“I am of course disappointed to have not achieved that objective, but I can look back at my time at the club with pride at what we accomplished, including two straight playoff appearances and countless memorable moments on the pitch…

“I am now looking forward to spending time with my family as I consider the next stage of my career.”

Gerrard, who scored five goals in 34 appearances during his 18-month spell in the U.S., did not confirm whether he would seek to continue his playing career or move into coaching.

He has been linked with a coaching position at Liverpool, where he spent 17 years as a player and lifted the Champions League in 2005 as captain.

“It’s certainly not the end of things for me in football terms, I have got a lot of things to consider and I’m sure I’ll be back involved in the coming months,” Gerrard said in an LA Galaxy video.

“I’ve got options on the pitch and off the pitch, I have got a bit of thinking to do in the next few weeks.”

Gerrard is widely regarded as one of Liverpool’s finest players having dedicated the majority of his career to the Merseyside club, making more than 700 appearances in all competitions.

Despite never lifting a top-flight league title with his boyhood club, he ended his Anfield career having won the FA Cup twice, three League Cups, the Champions League and the UEFA Cup.