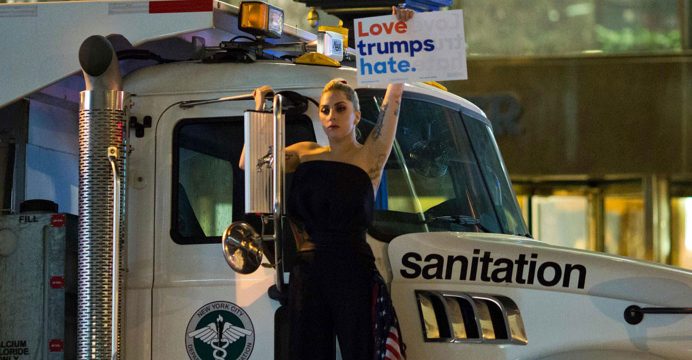 As the world reacts to the shock result of the US election, Lady Gaga has taken to protesting outside Trump Tower.

Musician Lady Gaga, a prominent supporter of Hillary Clinton, was photographed protesting outside Trump Tower in New York City in the early hours of Wednesday morning. As the hours passed Tuesday night and it became clearer that Trump would win the presidency, Gaga tweeted, “In a room full of hope, we will be heard. Stand up for kindness, equality, and love. Nothing will stop us. Say a prayer America.”

This comes after Gaga earlier challenged Donald Trump and his wife Melania.

After Trump’s prospective First Lady used a recent speech to bemoan online bullying, Gaga accused her of hypocrisy. Tweeting at Melania, Gaga wrote: “to say u will stand for “anti-bullying” is hypocrisy. Your husband is 1 of the most notorious bullies we have ever witnessed.”